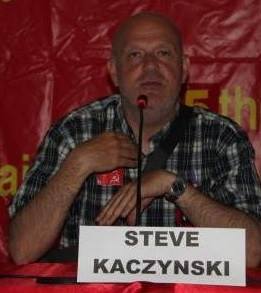 End the Smears against Steve Kaczynski!

The item below was originally published as a letter in the Weekly Worker (11 June).

It is not entirely clear at this point what Steve Kaczynski is accused of, if anything at all. He does not seem to have been charged, but is rather being held without charge by the Turkish government, which has put about claims that he is either an agent of British, or German, intelligence, or perhaps both.

There is much about this case that it is not possible to take a position on. It is not possible at this point to know what, if any, involvement he may or may not have had with any adventurist or guerillaist actions that may have been taken by the Turkish Guevarist group, the Revolutionary People’s Liberation Party-Front (or DHKP-C). However, the fact that the Turkish state (which is not actually ‘fascist’, notwithstanding the statement below) has not charged him, suggests they have no evidence of any such participation.

More to the point is that some on the British left are accepting what the Turkish state is saying about him. The allegations are paranoid fantasies in their own right. Steve Kaczynski is fairly well known on the British left, he has indeed been a member of the International Socialist League (now Socialist Resistance), the CPGB (Weekly Worker) and the Scottish Socialist Party. After he left the CPGB, around 1999, before I joined it, his infatuation with Turkish Guevarist trends like DHKP-C was no secret. If anyone made the mistake of trying to discuss their adventurist politics and strategy with him, he got very upset and made it very clear that he ‘revered’ (his words) the admittedly brave though misguided militants who made up this current, particularly those who sacrificed their lives in hunger strikes in Turkey against ill-treatment in prison.

He is a misguided individual in his politics, this is obvious. But he also is a sincere militant, sincerely wrong. Some people on the British Left, for instance Andy Newman of Socialist Unity, have endorsed the nonsense coming from the Turkish government about Steve K and used it to engage in innuendos about possible other ‘police agents’ on the British left.

All this reflects is the degeneration of Newman, politically and morally, as he has declined from a far left militant to a Labourite careerist who has done his own share of dodgy and dubious things. This has in the past included cosying up to the racist, anti-migrant English Democrats, as part of Newman’s search for a ‘progressive’ form of English nationalism as a counterpart to the SNP. Which is a good deal dodgier than anything Steve K has ever been involved in.

Kaczynski is certainly misguided, but he is a sincere leftist and no spy. He also appears to have done nothing wrong. He should therefore be freed from Turkish custody, and he certainly should be defended from these kinds of evidently baseless smears.

On April 2, the fascist AKP government regime in Turkey illegally raided the İdil Culture Centre (İdil Kültür Merkezi) in Turkey. İdil Culture Centre workers and Grup Yorum members have been arrested, then detained after being dragged from the premises and later tortured. British national Steve Shaw Kaczynski was detained at this time and remains without charge held in severe isolation conditions.

This follows major and continued unrest in Turkey, where the US-backed AKP fascist government continue to arrest and detain without charge any person who does not agree with their ideology and policies. Those who differ from the AKP are labelled ‘terrorists’, where any dissent is not tolerated and where brutal and violent force is often used. Furthermore, under the AKP government, workers that are unemployed, students that are protesting for free education, traders that cannot obtain enough work, journalists and independent press often have little or no rights and are continually arrested as criminals and terrorists.

Who is Stephen Shaw Kaczynski and what is his crime? He was born on July 5 1963 in Edinburgh, Scotland. He attended Linlithgow Academy and then went on to study Russian and German at the University of Edinburgh in the 1980s. He is currently and has always been a British national. Stephen worked for several years for the BBC World Service, based in Reading, and has also worked as a subeditor for various newspapers. Stephen is a kind and gentle man who abhors violence and has long campaigned for human rights and political freedom. He is a much-loved son, brother and uncle.

In 1996, when Stephen was working for the BBC, he began to learn and understand the struggles against Turkish government oppression, forming friendships and supporting individuals from the Turkish left who were involved in ongoing death fasts in Turkey. Being a man with deep concerns for human rights abuses around the world and also a socialist who has a longstanding affiliation and connection with Turkish culture, he speaks fluent Turkish and has for many years supported the Turkish community living in England, through, for example, translation of official documents, help with employment matters, immigration issues and other general support where needed. Stephen has helped to defend people’s rights in many different ways over the years and has participated in symposiums, seminars and panels, especially in relation to the continuation of Turkey’s death fast resistance, where 122 individuals have been killed in F-type prisons.

The fascist AKP government wants to frighten people at all levels of society through the continual slander of innocent people to discourage their ideas, with the systematic goal of trying to pressure people to forget their political identity. The AKP label foreign individuals like Stephen as ‘agents’ when they try to discredit them. Stephen was in Turkey for the purpose of international solidarity against fascism and was arrested on unsubstantiated claims by the AKP police. Media channels and newspapers commissioned by the AKP informed people that Stephen was an ‘agent’ and, whilst there is no evidence of this, the court and prosecutors have still not asked Stephen about it. After the raids, the media claimed that Stephen was a ‘British agent’. There is categorically no truth in this accusation. Whilst Stephen has been under police custody, the AKP-backed media have portrayed him as a traitor to his activist friends and to the beliefs he has always stood for.

How can we help and support Steve? We, as a committee for Steve Kaczynski’s freedom, are supporting our comrade with letters and cards ensuring that Steve feels our love, our solidarity and our respect for him. We do not believe the lies that have been said against him. We will oppose his illegal arrest and will be his voice in this, his country, and in Turkey. We invite all human rights defenders, our friends and our people to support Steve by writing letters and sending cards to him. We are repeating the slogan that Steve had shouted during his arrest: ‘Pressures cannot intimidate us!’

In the United Kingdom, please contact the following to ask for their support and help with the immediate release of Stephen: Foreign and Commonwealth Office; Prisoners Abroad; Reprieve; Fair Trials International; and Amnesty International.