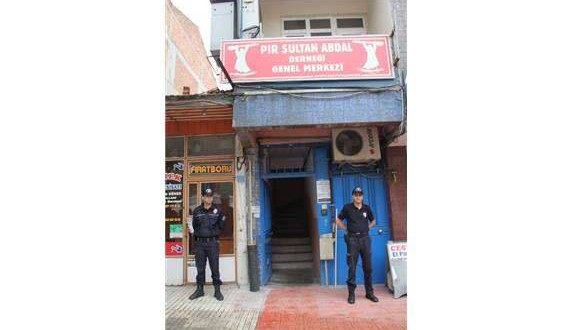 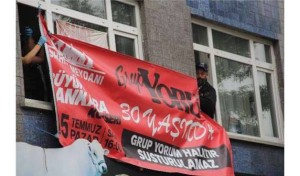 On July 9, the fascist AKP government regime in Turkey illegally raided the Pir Sultan Abdal Culture Assocation in Turkey. Assocation workers and Grup Yorum fans have been arrested, then detained after being dragged from the premises and later tortured. Police took custody three revoulationaries İbrahim Devrim Top, Kübra Sünnetçi and Hasan Gürlek. Pir Sultan Abdal Culture Assocation is Allawi religous and cultural association. They make legal demonstrations, traditional events in their open association.. Association workers lawyers told about that there re no evidence for invesitigation. This action unlawful and arbitrary!

AKP fascist government continue to arrest and detain without charge any person who does not agree with their ideology and policies. Those who differ from the AKP are labelled ‘terrorists’, where any dissent is not tolerated and where brutal and violent force is often used. Furthermore, under the AKP government, workers that are unemployed, students that are protesting for free education, traders that cannot obtain enough work, journalists and independent press often have little or no rights and are continually arrested as criminals and terrorists.

The fascist AKP government wants to frighten people at all levels of society through the continual slander of innocent people to discourage their ideas, with the systematic goal of trying to pressure people to forget their political identity.