BIGtheme.net http://bigtheme.net/ecommerce/opencart OpenCart Templates
Home » Internatıonal News » #Yemen is on the brink of a humanitarian disaster. If you’re not prepared to sit back & watch that happen, act now: UPRISE FOR YEMEN 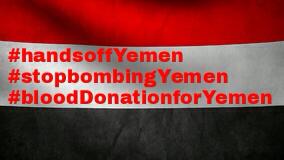 #Yemen is on the brink of a humanitarian disaster. If you’re not prepared to sit back & watch that happen, act now: UPRISE FOR YEMEN

Stop the violence in Yemen
Escalating conflict in Yemen is making a dire humanitarian situation worse. We must do all we can to push for a permanent and immediate ceasefire.

Before the current conflict, Yemen was already the poorest country in the Middle East. Over 10 million people were going hungry, including 1 million acutely malnourished children. This number has increased by nearly 2 million since the conflict began.

There was a moment of hope when an announcement came that airstrikes would stop but they have since resumed.

Violence has damaged homes, schools and even hospitals. So far, over 2,000 civilians have lost their lives and over half a million people have been displaced.

Food and diesel, which is needed to pump clean water, are increasingly in short supply and their prices are rising – putting these basic necessities out of reach for ordinary families. And at a time when people desperately need them, vital supplies can’t enter the country. That could prove disastrous, because Yemen relies on imports for 90 per cent of its food.

Escalating violence is making an already dire humanitarian situation much worse. The conflict must stop.

It is critical that the government pushes for an immediate and permanent ceasefire, so that vital humanitarian assistance can be delivered to people in Yemen. We must do all we can to prevent any further suffering to those who already desperately need help.

People search for survivors under the rubble of houses destroyed by Saudi airstrikes near Sanaa Airport, Yemen. Photo: Abo Haitham