BIGtheme.net http://bigtheme.net/ecommerce/opencart OpenCart Templates
Home » Internatıonal News » The Channel Tunnel has been closed again because of a strike by French ferry workers – with protesters setting fire to the track. 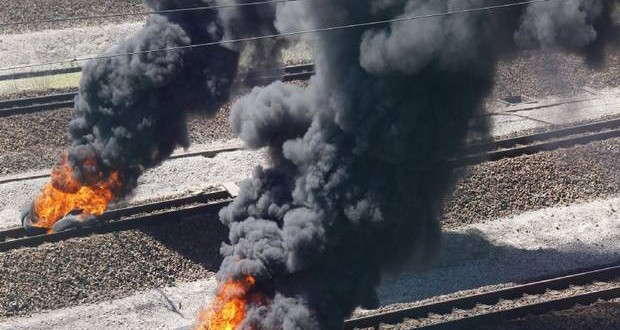 The Channel Tunnel has been closed again because of a strike by French ferry workers – with protesters setting fire to the track.

http://www.independent.co.uk/news/world/europe/channel-tunnel-closed-again-by-strike-as-protesters-set-fire-to-the-track-10355662.html
The Channel Tunnel has been closed again because of a strike by French ferry workers – with protesters setting fire to the track.

Major transport links to the continent have been plunged into chaos for the second time in just over a week, with a blazing blockade closing the Port of Calais and halting Eurostar, shuttle and ferry services.
Thousands of holidaymakers and lorry-drivers face misery on both sides of the Channel in soaring temperatures, with police warning that the port of Calais would be closed until Thursday.

Vast queues of stranded tourists, waiting to board the Eurostar, have built up at St Pancras Station in London while walls of lorries and cars have built up near the entrance to the tunnel.

Around 30-50 protesters cut their way through fences at the Eurotunnel site and blocked the track with burning tyres. Eurotunnel said they had been arrested and taken away by police. “We will be pressing charges,” a spokesman said.

The tunnel reopened mid-afternoon on Tuesday, allowing Eurostar and Eurotunnel services to resume, albeit with a reduced service.

Shortly before 3pm, Eurotunnel announced that its passenger service would resume “very shortly” but added that services would “take time to return to normal” because of long traffic jams.

The British government called the strike – which involves around 100 MyFerrylink workers – as “completely unacceptable”, and advised travellers to check with operators before setting off.

Kent police are calling on motorists stuck in traffic jams to keep their cars ventilated and ensure babies, the elderly and animals are not left alone in stationary cars.

A Eurotunnel spokesman said: “Services through the Channel Tunnel are currently suspended until further notice due to action by the Maritime Nord union who are also blockading the port of Calais.
“Eurotunnel deplores the actions of this union which have severely disrupted cross channel traffic over the past week. Eurotunnel calls on the governments of both Britain and France to bring an end to this industrial action and to restore order in the Calais region.”

A British government statement said it was working closely with French authorities to return to normal as soon as possible.

It added: “Passengers on both sides of the Channel intending to travel through either Dover or Calais should check with their chosen operator before they travel.

“Operation Stack [where freight traffic is held on the coastbound carriageway] is in operation on the M20 and road users are advised to follow the signs in order to minimise disruption.”

Ferry services to and from Dover in Kent have been hit by the strike, which started at the northern French port at 2.20pm on Monday.

Striking ferry workers are blockading the French port to all users, meaning the “the local environment is in chaos … there is gridlock”, according to the Eurotunnel spokesman.

He said that in recent days the pattern of migrant activity has spread from attacking trucks on motorways to trying to access the terminal.

“There are migrants everywhere which means we have to control the trucks before they get to the site” , he added.

Crew members and catering staff on MyFerrylink services announced a strike after Eurotunnel, which owns the ships, sold the cross-channel service to rival operator DFDS.

The sale came after a competition authority ruling and left up to 600 jobs, including 70 in Dover, under threat.

MyFerrylink, which runs 16 crossings from Dover to Calais, was due to officially stop all services from a minute past midnight on Thursday. The firm could not promise that services will restart before then.

P&O Ferries chief executive Helen Deeble said: “This has left thousands of holidaymakers and lorry drivers stranded without adequate facilities – even though our employees at the port have done their level best to keep them supplied with food and water.”

A Port of Dover spokesman said DFDS Seaways services were running to Dunkirk as normal.

Eurostar was not able to say when it will be able to resume services.

A spokesman said: “At the moment we cannot run trains – if the tunnel is closed we just cannot run Eurostar services”.