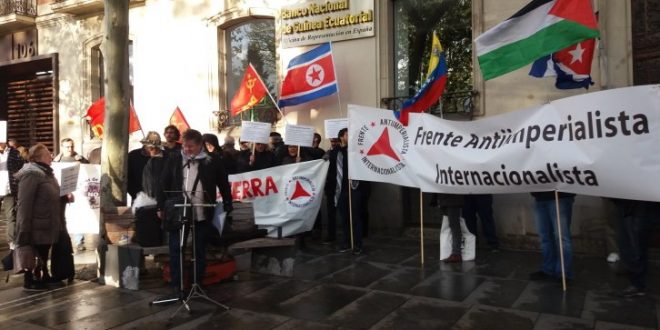 Our friends from Spain, Anti-Imperialist Internationalist Front have taken part in the campaign against NATO. We are forwarding the news from them.

Within the activities of the campaign against NATO on it’s 70th anniversary, Anti-Imperialist Internationalist Front (FAI) has organised a rally in front of the US embassy in Madrid, Spain.

After an intense but brief hailstorm, some 50 people accompanied the representation of “the NATO clown”, with a satirical interpretation of the role in security and stability that politicians and the mass media try to convince us NATO plays and of the complicity of the Spanish state and the cession of military bases to the US.

Slogans were chanted against NATO and its interventions, such as “NATO no, bases out”, “Military expenses for schools and hospitals” or “NATO provokes, Venezuela is not to be played with”, some songs of anti-imperialist resistance were interpreted and the communiqué below was read, and the participants were reminded of the existence of the campaign and to be attentive to further actions to be called.

For 70 years, NATO has not only carried out wars against states it has considered uncomfortable, but has also carried out terrorist operations using Nazi and fascist figures in order to put an end to left-wing movements. Today, NATO directs its military troops towards urban combat, showing once again that one of its objectives continues to be to intervene within countries for the control and submission of peoples who do not accept the dictates of the capitalist order.

Successive Spanish governments have always subordinated national sovereignty to US interests. Franco’s dictatorship offered troops to the United States for its war in Korea and with the Pact of Madrid 4 military bases were installed in our territory. The integration into
NATO took place after a deceptive campaign full of threats and blackmails to the population. After becoming full members, we have contributed to the dismemberment of the ex-Yugoslavia, participated in the invasion of Afghanistan, in the destruction of Iraq and in the absolute ruin of Libya and we have collaborated with France in the plundering of Africa, operations that have caused countless innocent victims.

Today there are important deployments of Spanish troops in combat missions in the Baltic States, Lebanon, the Horn of Africa, Turkey, the Mediterranean Sea and several African countries, in addition to other training missions for the obedience to NATO of local forces in Iraq, Afghanistan and Sub-Saharan Africa. All of them, under the umbrella of NATO or at the service of the colonial interests of the allied countries, taking advantage of NATO resources.

In all military interventions in Africa, the Near and Middle East and Eastern Europe, US bases in Spanish territory have served as a resupply point for its military forces. In recent years, its offensive role has been reinforced with the stationing in Rota of the four destroyers of the anti-missile system, which they now intend to raise to six, and the Air-to-Earth Rapid Intervention Force of the US Marine Corps in Morón. All this, with the threat of making the allies pay for the costs of deploying their troops in each country.

The recent establishment in Torrejón of the Combined Air Operations Centre for NATO’s southern flank is another addition to these bases.

The Spanish Armed Forces also play a fundamental role in Colombia’s integration into NATO, which seeks to ensure that the US offensive against Venezuela and Latin America in general is backed by all its allies.

Our growing role in the imperialist war has taken the risk to the Spanish population to an unacceptable level. And the cost of this adventure has meant a commitment to raise military spending to 2% of GDP, as demanded by the US.

We denounce the surrender of sovereignty that implies the formal and informal submission of State institutions, companies, political parties, the media and the country’s own territory to foreign interests and the moral responsibility that their acceptance, explicit or implicit, implies for the enormous damage they produce, both NATO itself and the US military forces and agencies that use our country as a base or as support for their criminal activities. Sovereignty that is even more limited in the face of growing difficulties in defending the rights of the popular classes in an environment of generalized fear and diminishing freedoms.

The suffering inflicted by the imperialist war results in a dramatic appeal to the working classes of the central countries and to internationalism that we cannot ignore. We demand of our governors the exit from NATO, the denunciation of the “Treaty of Friendship and Cooperation” with the United States, the closure of the North American bases and the development of policies of peace and negotiation for the management of the legitimate interests of the Spanish people, in opposition to the customary policies of threats, impositions and wars to which NATO drags us.

For all these reasons, we join our voices to those of masses around the world who cry out “70 years of NATO – 70 years of militarism, destruction and violence, misery, expulsion and death”.

Not in our name!
Expulsion of U.S. troops and closure of bases!
Immediate exit and dismantling of NATO!
They will not pass!

A Rally Against the 70th Anniversary of NATO In Madrid 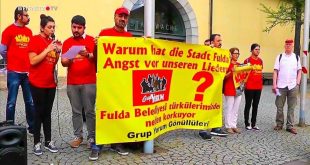 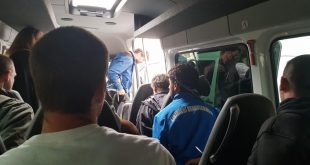 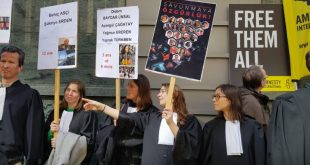 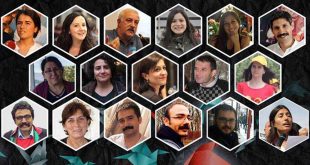 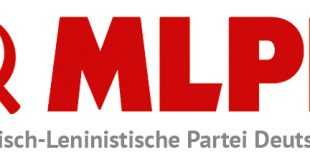 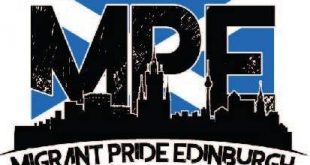 Dear colleagues, From Migrant Pride and Edinburgh in Protest we did not want to miss ...