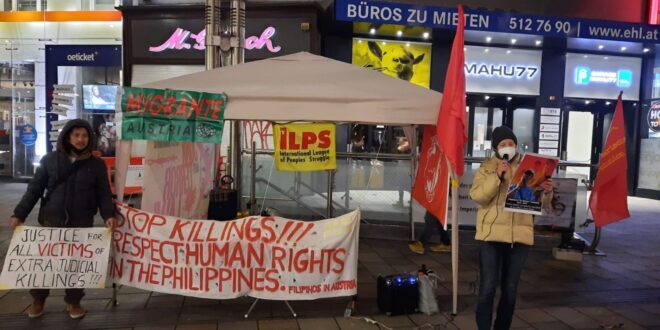 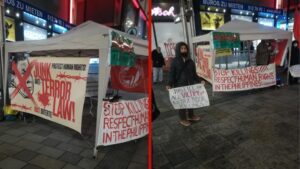 The 26th of August is an important day in the struggle of Filipino people for independence
from Spanish colonialism. In 1896 the Filipino people openly refused the colonial rule and
started a nationwide struggle for liberation.
Today the democratic liberation struggle continues to end the crimes of the fascist puppet
regime of Duterte and against the domination of US-imperialism.
We support the cry of the Filipino people in struggle “for just and lasting peace in the
Philippines and to end Duterte’s terroristic fascist rule”, knowing that there can’t be a peace
without justice and with a ruling power which doesn’t serve the people but constantly
increases poverty and misery of the people by selling the country to imperialism and
therefore terrorizes the popular resistance against oppression and exploitation.
We hereby also want to stress once again that we support all progressive resistances in the
world for the liberation of the people in any country subjected to state terrorism and
imperialist domination.
We support the mobilization of the Filipino comrades on the 26th August to highlight their
struggle for independence from 1896 until today and will be part of their actions held on
this date.
Long live the united struggle of our peoples towards liberation and a peaceful society
without exploitation and class rule!
People’s struggle is not terrorism!
We are the people, We are right, We will win!