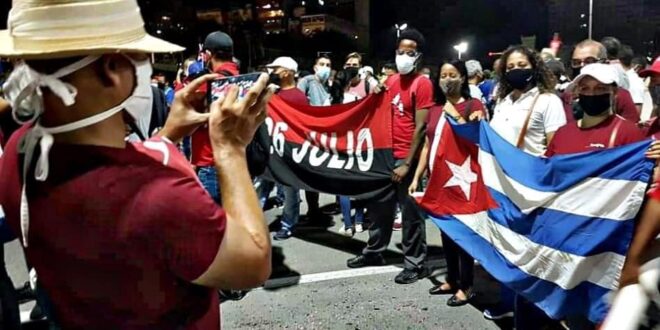 On July 11 and 12, counter-revolutionary protests, which state officials described as a “soft coup attempt”, took place in Cuba.
In some cities of the country, actions directed by imperialist henchmen were organized. These protests, which were distorted in the anti-communist and imperialist media, consisted of actions of 50-80 people at most in a few provinces and were repelled by the Cuban people who defended socialism and revolutionary values after lasting from Sunday, July 11, till partly Monday.

The bourgeois media in Europe and especially in the USA, waited in ambush to publish the contra news. It‘s no surprise that they preferred to get “information” from the news center of the counter-revolutionaries based in Miami, rather than from the official authorities in Cuba or its friends who stand with the Cuban people against the imperialist embargo and sanction policies, which have been implemented for decades and which are the main cause of problems such as hunger and poverty in the country.

Despite all the scenarios and interventions, Cuba, which has resisted all kinds of difficulties and foreign attacks for decades, has also overcome this. While the situation in Cuba has cooled off already, the counter-revolutionary and their supporters abroad are trying to keep this provocative climate on the agenda with various protests and fake news. Along with the representatives of imperialism, there are calls for military “intervention” on the one hand and aid-adorned on the other. The Cuban state has also had a clear answer to these calls.

The message and call to Cuba’s friends in the world is to spread the truth against such false and contra news, and to continue all kinds of political and moral support.

Below, we include excerpts of official statements from Cuba published in the Cuban newpaper Granma.

LONG LIVE SOCIALIST CUBA, DOWN WITH IMPERIALISM!
LONG LIVE THE FRIENDSHIP OF THE ENTIRE PEOPLE, WE’RE WITH THE PEOPLES OF CUBA!

“For 60 years the example of the Cuban Revolution has bothered the United States”, stated First Secretary of the Communist Party of Cuba and President of the Republic, Miguel Díaz-Canel Bermúdez, on 11th July, during a special message from the Palace of the Revolution explaining to the people the most recent provocation orchestrated by small groups of counterrevolutionaries.

“What is the background to this situation we are experiencing”, he asked.
“We have been honest, we have been open, we have been clear, and at all times we have explained the complexities of the current situation to our people. I remember that more than a year and a half ago, when the second half of 2019 was just starting, we had to explain that we were heading toward a difficult conjuncture, and we used that term, which was later taken up as part of popular humor, since we have remained in this ‘conjuncture’ for a long time…Beginning with all the signs that the U.S. government, headed by the Trump administration, was giving in relation to Cuba.”
Diaz-Canel recalled that the adoption of an extensive series of restrictive measures to tighten the blockade began; financial persecution, energy persecution, with the goal of asphyxiating the country’s economy.
He denounced ongoing efforts to provoke a massive social explosion in Cuba, including all sorts of propaganda and ideological constructions they fabricate to call for misnamed humanitarian interventions, which end up as military interventions and interference, trampling the rights and violating the sovereignty, the independence of peoples.
This succession of hostile acts continued, he noted, “Then came the 243 measures we all know about. And in the last days of that administration the decision was made to include Cuba on the list of countries sponsoring terrorism.”
He reiterated that this list is a totally spurious list, an illegitimate list, and a unilateral list, fabricated by the U.S. in the belief that they are the power dominates the world, that they are the emperors of this world.

“And that further increased the impact of the restrictions, which above all implied that the country was immediately cut off from its main sources of foreign currency income: I am talking about tourism, I am talking about the trips of Cubans and U.S. citizens to our country, about the much-awaited remittances to Cuban families from their relatives in the United States.”

The President also denounced U.S. efforts to discredit Cuban medical brigades, since this medical collaboration, beyond the many instances of solidarity provided, also generates foreign currency income.
All this, he said, is causing shortages in the country: “Shortages of food, of medicines, raw materials and inputs needed by our economic and productive processes, which contribute both exports and supplies for the people; therefore here two important elements are cut off: the capacity to export and to acquire foreign currency to import and invest, and the capacity of the productive processes to be produce a full range of goods and services for our population.”
He pointed out that the country “has seen its fuel supply limited, access to spare parts limited, and all this has caused dissatisfaction, has exacerbated accumulated problems, which we have not been able to resolve, have been around since the special period, and to all this has been added a ferocious media campaign to discredit us, as part of a so-called non-conventional war, which attempts, on the one hand, to break the unity of the Party, the government, the state and the people, attempting to portray the government as inept, incapable of providing wellbeing to the Cuban people, attempting to portray the U.S. government as “very concerned about the welfare of the Cuban people,” who it has unjustly blockaded, telling them how they can aspire to development and progress in a country such as ours.
“These are the usual hypocritical prescriptions and speeches of double standards, which we know very well, throughout the history of United States behavior toward Cuba. We know how they intervened in our country, how they appropriated our island, how they maintained domination of our Island during the pseudo-republic and how their interests were hit hard by the triumph of the Cuban Revolution.
“For 60 years the example of the Cuban Revolution has bothered them, and they have constantly tightened… applied an unjust, criminal, cruel blockade, reinforced, worse than ever under pandemic conditions. Therein lies the manifest perversity, the maliciousness of all these intentions: blockade and restrictive measures, which they have never taken against any other country, or against those they consider their main enemies.“

“And in many of those first world countries, with much more wealth, health systems collapsed, intensive care units were overwhelmed. The poor have been disadvantaged because there are no public policies directed toward saving the people,” and these rich countries in many cases have worse results than Cuba in terms of responding to the pandemic.”

But now, he noted, “in a very cowardly, subtle, opportunistic and perverse manner, exploiting the most difficult situations we have in provinces like Matanzas and Ciego de Avila, those who have always supported the blockade, those who have served as mercenaries, lackeys of the Yankee empire, begin to appear with calls for a humanitarian intervention, a humanitarian corridor, to strengthen the idea that the Cuban government is not capable of handling this situation, as if they were really interested in the welfare and health of our people.”
“If they want to make a gesture toward Cuba, if they really are concerned about the people, if they want to solve Cuba’s problems: lift the blockade and let’s see how we do, why don’t they do that? Why don’t they have the courage to lift the blockade, what legal and moral basis allows a foreign government to implement such a policy against a small country, and in the midst of such adverse conditions? Isn’t this genocide?”

“Now they are shouting that we are murderers. Where are the murder victims in Cuba, where are the missing persons in Cuba? Other countries that have suffered these pandemic peaks were not attacked in the press and they were not offered humanitarian intervention as a solution, nor were they subjected to these slander campaigns as we are”, Díaz-Canel emphasized.

“I believe that life, history, the facts show what is behind all this, which is the effort to asphyxiate us and put an end to the Revolution, and for that they are trying to discourage our people, to confuse our people. And when the people are facing severe conditions, then events like the ones we experienced in San Antonio de los Baños take place.”

About the events in this area, he detailed:
“Who was part of the group? It included members of the population, who have needs, who are experiencing some of these shortages; it included revolutionaries who are confused, do not have all the arguments, or were expressing these dissatisfactions, but they were doing differently, because they were seeking to understand, seeking explanations.”

“But this was led by a core group of manipulators who are indeed lending themselves to the designs of the SOS Matanzas or SOS Cuba campaigns… Several days ago, they were preparing demonstrations or social disturbances of this type in several Cuban cities. This is criminal, at a time when people should be at home, protecting themselves.”

Diaz-Canel reported that revolutionaries in San Antonio de los Baños, provincial authorities, a group from the country’s leadership showed up there, we confronted the counterrevolutionaries and we talked to the revolutionaries, and to those asking for explanations, to show that Cuba’s streets belong to revolutionaries.
He pointed out that we know there are other groups of people gathering in streets and plazas, in other cities of the country, also moved by unhealthy purposes.

“I am also giving this information, to reaffirm that in Cuba the streets belong to revolutionaries, that the state, the revolutionary government, guided by the Party, are more than willing to discuss, to argue and to participate with the people in the solution of problems, but recognizing the real cause of our problems, without allowing ourselves to be confused.”
“Those who are encouraging demonstrations are not interested in good healthcare for Cuba, he emphasized. Remember that their model is neoliberal, the privatization of health, of medical services, of education; that everyone should save themselves as best they can, that those who have the money can access health care”, he warned.

“We are not going to surrender sovereignty, the independence of our people, or the freedom of this nation. There are many of us revolutionaries in this town who are willing to give our lives and this is not a slogan, it is a conviction. They will have to step over our corpses if they want to confront the Revolution, and we are ready for anything and we will be in the streets fighting.”

“We know that incidents of this type are being orchestrated in the streets of Havana and that there are large groups of revolutionaries confronting counterrevolutionary elements. We are separating the confused revolutionaries, the inhabitants of Cuba who have specific concerns, but we are not going to allow any counterrevolutionary, any mercenary, to provoke destabilization among our people.”

“This is why we are calling on all revolutionaries in our country, all communists, to take to the streets in any of the places where these provocations may take place today, from now on, throughout these days,” he insisted.

“As I said in my closing speech at the Party Congress, we revolutionaries defend the Revolution above all else, we communists on the front lines, and with that conviction we are now in the streets, we are not going to allow anyone to manipulate our situation, or defend a plan that is not Cuban, that is not for the welfare of Cubans and that is annexationist. This is the task to which we call revolutionaries and communists of this country,” he concluded.