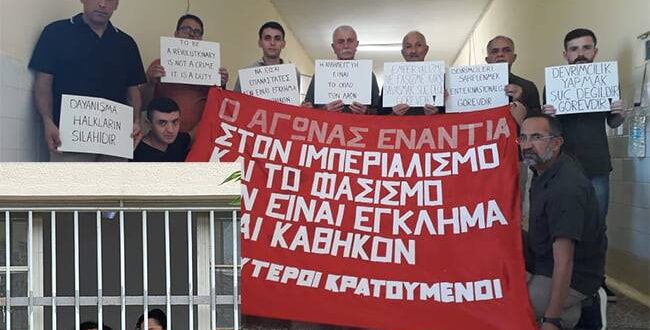 WE WANT A FAIR TRIAL FOR THE 11 TURKISH REVOLUTIONARY PRISONERS IN GREECE!

WE WANT A FAIR TRIAL FOR THE 11 TURKISH REVOLUTIONARY PRISONERS IN GREECE!
THE COURT COMMITTEE SHOULD STOP ITS HOSTILE ATTITUDE AND MAKE DECISION IN ACCORDANCE WITH THE LAW,
NOT WITH POLITICAL INSTRUCTIONS!
WE WANT JUSTICE!

The trial of 11 Turkish revolutionaries, who were arrested in the operation carried out by the Greek security units in cooperation with the Turkish National Intelligence Organization upon the pressure of the Turkish government on March 19, 2020, started in the courtroom of the Koridallos women’s prison on July 2, 2021 at the Athens High Criminal Court.

However, this trial was no ordinary trial. This trial was a typical example of the practice of “enemy criminal law”, which we have seen in dozens of examples in Turkey, where all established rules of law are ignored, and which is carried out with political instructions.

What happened in this period, what violations of law occurred?

* In the first hearing held on July 2, the defendants wanted to come out with materials expressing their political identity, which is the main basis of the accusations, and to make their defense in this way, but this was not allowed and the hearing was suspended on July 7-8-9, without even bringing the defendants to the courtroom. Thus, the rights of defense of political prisoners on trial were usurped.
* Arbitrary practices and attacks on the detained defendants continued during the hearing, which continued on 7-8-9 July. An unfair and even hostile trial practice was put forward by violating the rights of the defendants regarding the trial, especially the right of defense.
* The court board that conducted the trial has behaved far from the image of an independent and impartial court since the beginning of the trial. Throughout the trial, the court continued to take a partial, biased and even hostile attitude towards the prisoners, the witnesses, and even the lawyers.
* During this period, the court board made the right of defense useless by ignoring the demands of the political prisoners on trial, limiting their right to speak and intervening constantly.
* The court committee constantly interfered to the statements of the witnesses and prevented them from speaking. It tried to get the answers it wanted by directing even the defense witnesses against the defendants. It made clear that it did not conduct an impartial trial by interfering with or obstructing the questions of the defendants’ lawyers towards the witnesses.
* Finally, on July 8, during the pause of the hearing, the police officers wearing masks and special uniforms attacked and tortured the defendants in the courtroom, tried to put them on the ground and put them in reverse handcuffs. The prisoners on trial were injured following this attack and torture. Sinan Oktay Özen, one of the defendants, got worse after a policeman kicked him in the chest and he was taken to the hospital.
* At the hearing held on 9 July, the defense lawyers did not attend the hearing, protesting the court’s attitude the day before. The political prisoners on trial, on the other hand, made a defense by describing the police attack and torture that took place the day before, and criticized the court’s attitude that allowed torture and ignored it.
* They also said that they would not continue the hearing under these conditions, both because of the arbitrary and hostile attitude of the court and because they did not have lawyers and sufficient number of translators. However, the court board tried to prevent and silence these defenses of the defendants by interfering constantly, and tried to listen to a witness by declaring that they would continue the trial under these conditions.
* Meanwhile, the defendants left the hall protesting this attitude of the court, saying that their rights of defense and fair trial were abolished, that they would not allow this, and that they would not bow to this arbitrary and hostile attitude of the court.
* Thereupon, the court board took a step back and gave up this attitude and suspended the hearing. After the break, the court adjourned the hearing to 09:00 a.m., on Tuesday, July 13.

We know this practice of political trial very well from Turkey. We know very well the hostile attitude of the court committee from the robed executioners of AKP fascism like Akın Gürlek.

And to oppose this arbitrary and hostile attitude of the Athens high criminal court; We call on all our colleagues, jurists and on our people to take a stand against this unlawfulness and injustice by sending individual or institutional statements, fax, e-mail or letter to the Athens Criminal High Court, the Greek Ministry of Justice and the Ministry of Public Order.