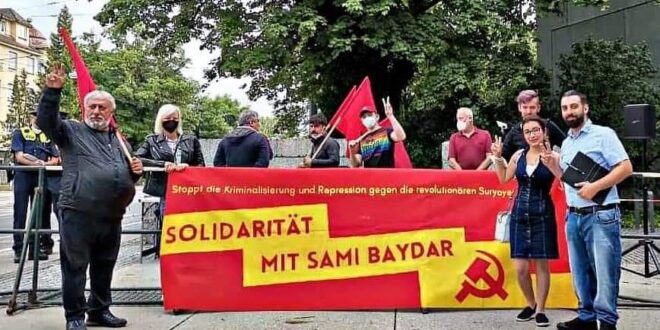 Sami Baydar was sentenced on Wednesday, June 23rd by the district court of Augsburg to 3600,00€ fine (90 daily sentences x 40€). That it concerns with the process evenly not only a simple “Slander”, but around a political procedure, made the court already in the apron clear.

The court arranged for a severely limited number of trial observers of only 6 people, whose identity cards were checked and even written down. So-called recording materials such as cell phones or laptops were forbidden to be taken into the courtroom and had to be handed over to the guards.

Attorney Mathes Breuer saw this was an interference with the principle of publicity as well as with his own work, and also a prejudicial and disproportionate behavior towards his client.

Therefore, right at the beginning of the hearing, attorney Breuer requested that the police officers in the courtroom disarm themselves.
The court denied this request.

The trial took place at 9:00 a.m. in the Augsburg District Court. In this trial, 4 police officers were summoned as witnesses by the public prosecutor’s office, among them mainly so-called “state protectors”. One of the police officers called in sick today and could therefore not be questioned.

In front of the courthouse, a solidarity rally was called for 8:30 a.m. under the slogan “Stop the criminalization and repression against the Revolutionary Syriacs!”. SOLIDARITY WITH SAMI BAYDAR” was announced.

In their speeches and loud slogans they all express solidarity with Sami Baydar and criticize the increasing repression against left-wing activists as well as as well as revolutionaries from Turkey and Mesopotamia by the German state. The rally continued during the trial. At the same time, songs by Grup Yorum were played alternately to the speeches.

Lawyer Mathes Breuer gave a summary of the trial after three hours. This included how the police tried to put Sami Baydar in a bad light with some allegations.

Among these allegations of the state police against Sami Baydar were even Verlezungen of official secrets.

The court case impressively refuted the façade of a democratic, German constitutional state. Sami Baydar and his lawyer do not accept the verdict and appeal.

At the end of the rally Sami Baydar thanked all the people who stood in solidarity with him and fought together for justice with the words of Bertolt Brecht: “Where injustice becomes right, resistance becomes a duty.

-People’s Council of Syriacs in Europe-