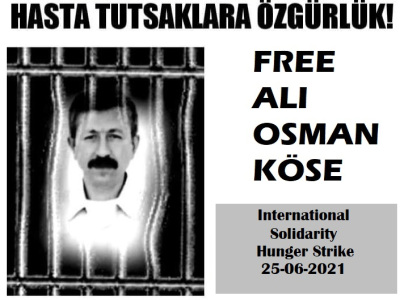 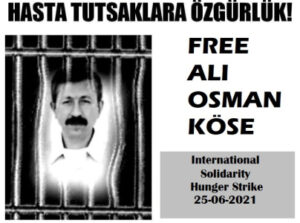 We would like to share this important call and announcement with you:
We, as the volunteers of the Freedom Committee for Ali Osman Köse decided to organize a One Day International Solidarity Hungerstrike with the demand for immediate release of the sick political prisoner.

Ali Osman Köse’s final application to the Constitutional Court in Turkey to release him for proper treatment was refused as it has been for many other legal applications in favour of his health and life safety before.

The court, which is already known for it’s political decisions, commented that the cancer patient could receive proper treatment in prison. It took this court over 2 months for responding to the application made on 1st April and only decided after the critical cancer surgery of Ali Osman Köse with such unrealistic evaluations and claims.

It is obvious that under such prison conditions which didn’t even allow him to get proper examination and caused the cancerous cyst in his kidney developing to a life threatening stage, will rather lead to a slow painful death than to his recovery.
Furthermore, the prison staff even delegated the duty to change the delegated the duty to change the dressing for a sick prisoner to his cell mate, stating there was no doctor available in the infirmary.

Therefore, we should send out a strong signal of solidarity to the authorities in Turkey as well as to the European Human Rights Court, which should probably be the next instance for the application to free the serious sick prisoner.

We therefore invite and ask you to join our international hunger strike this FRIDAY, JUNE 25, and to announce your support with a short solidarity video, either speaking or holding up a poster with writings. The text can be as follows:

“I/We support the one-day hunger strike on 25th June for the political sick prisoner in Turkey, Ali Osman Köse and demand his immediate release for treatment”.

Probably you can find one or more otherfriends to join the action in your country…
Let’s show that the Freedom Committee for Ali Osman Köse is International, Powerful and Active!!

The hunger strike action will be supported by a lot of volunteers, as far as confirmed from UK, France, Austria, Greece, Italy, Germany, by Turkish/Kurdish supporters as well as Iranian, Syriac, Irish, Filipino internationalists and these examples can surely be extended..

Let us be hundreds of Voices of Freedom spread to the world!
Please send us your solidarity videos with your announcement to support the hunger strike, if possible latest Thursday.

Even your solely message with the above proposed demand for freedom, if you have reasons not to participate in a hunger strike, would be great.

We’re awaiting your messages and videos and will publish it if you agree in our web page..

May our solidarity succeed!