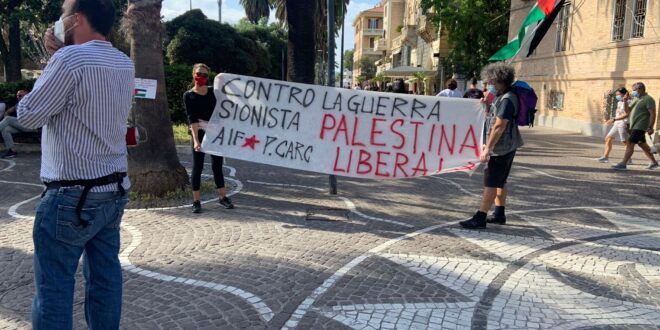 FOR A FREE PALESTINE, SOLIDARITY IS OUR WEAPON!

On 5 June, the Palestinian community in Italy has called for a national demonstration in support of Palestine. With the slogan “No to the occupation, free Palestine and Jerusalem as capital”.
“The bombing of the Gaza Strip has stopped but the aggression and ethnic cleansing against the Palestinian people continues.
In the latest massacre against Gaza, which lasted 11 days, 256 Palestinians were killed, including 66 children and 42 women, while 6,000 were injured, including 170 journalists.
More than 110,000 people have been displaced and 1,500 residential and public buildings have been destroyed or seriously damaged, including 66 schools, mosques and health centres.
Roads have also been destroyed, including access roads to hospitals, infrastructures, pipelines and power lines, media headquarters, and hundreds of industrial and commercial establishments have been destroyed or severely damaged”. The press release written by the Palestinian community and associations in Italy stated.
The United Nations, the European Union and the international community can no longer continue their complicit policy of allowing israel to violate UN resolutions, human rights and international law with impunity.
It is time for Italy, the European Union and other states to start boycotting Israel’s war economy and the companies and institutions that are complicit in it.
International pressure must be applied until israel ends the occupation and colonisation of Palestine, dismantles the settlements and the Wall, recognises the full equality of fundamental rights for all the inhabitants of historical Palestine, recognises the right of return for Palestinian refugees (UN resolution 194), lifts the siege on the Gaza Strip and guarantees self-determination for the Palestinian people.
The Anti-Imperialist Front responded to this call and organised, together with the PCARC, a flash mob to raise consciousness.
Solidarity is a weapon, let’s use it!
United against US imperialism and israeli Zionism!
Down with Zionism!
Long live our struggle!
Free Palestine!
Red Palestine! 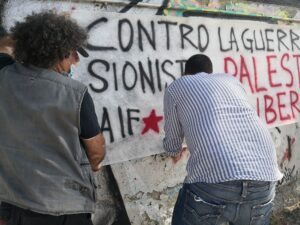