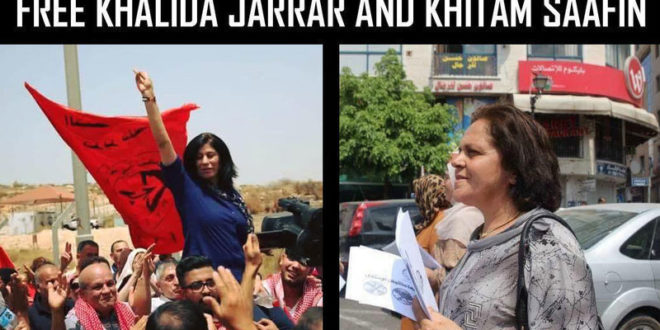 Khalida Jarrar is a member of Popular Front of Liberation of Palestine (PFLP). She got arrested from Israeli occupation forces, in her house in Ramalla, in occupied West Bank, in October 2019. More than 60 Israeli soldiers went to her house illegal to arrest her.  After this date she is still imprisoned with administrative detetion. This is not the first time that she faced the injustice and repression from Zionism. She got arrested and imprisoned many times because she struggles as a Palestinian by side of her people. As an advocate for human rights against the criminals of Israel that occupied the Palestine. As a woman fighter for rights and justice. As a parliamentary of Palestinians. As a comrade for freedom inside the Resistance. Thats why Zionism and imperialists attack to her because so many years never surrended.

Khitam Saafin is president of the Union of Palestinian Women’s Committees, a well-known international advocate for Palestinian women for freedom and justice for the Palestinian people.She was ordered by an Israeli military commander to six months in administrative detention, imprisonment without charge or trial, on 9 November 2020. Also is not the first time that she faced this repression and injustice.She was again imprisoned by occupation forces with administrative detetion, in 2017.

Administrative detention is a measure of repression and arbitrary punishment, which was implanted by the British army and later continued by Israeli occupation forces towards Palestinian people.

The arrests of Khalida Jarrar and Khitam Saafin clearly come as an attempt by the Israeli occupation to attack Palestinian popular movements and suppress them through fear, arrests and intimidation carried out by a massively armed occupation force.

The attack of Israeli Zionism and imperialism is growing. With the US proclaiming Jerusalem as the capital of Israel, USA statement on the deal of the century, the deep occupation through the annexation of large parts of the West Bank, the US-Israel-Arab Emirates- Bahrain peace agreement. House destruction, arrests, torture and murder of Palestinians, bombings and attacks, imprisoned childrens.

For our part, as Anti-İmperialist Front,  we are sending a signal of international solidarity to the Palestinian prisoners, all the Palestinian people and their heroic Resistance. We will struggle by their side until the Victory.

AGAINST  IMPERIALISM AND ZIONISM

SUPPORT PALESTINIAN RESISTANCE UNTIL THE VICTORY

FROM THE RIVER TO THE SEA PALESTINE WILL BE FREE