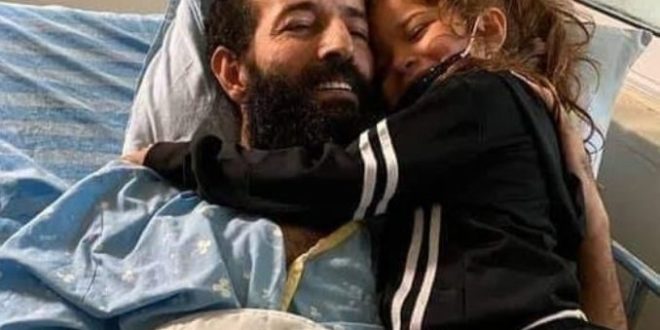 Administrative detention is a measure of repression and inofficial punishment, which was implented by British army and later contiued by Israeli occupation forces towards Palestinian people.
Maher Al-Akhras has undergone such a measurement many times in his life because of his engagement and support of political prisoners.
In this moment Maher is on a hunger strike for 100 days to demand an end to the administrative detention imposed on him another time. His resistance is not only for his own freedom but on behalf of all the Palestinians who suffer from this repressive policy.
In this moment Maher Al-Akhras is in a hospital and due to his long-term hunger strike his health situation gets serious.
To suppoert his just demand and avoid that his health condition gets worse and even a concrete threat for his life, AIF supporters of different countries are carrying out a solidarity hunger strike throughout this week.
Dates and countries where solidarity hunger strikes are being carried out:
Monday (2nd Nov.): Donbass
Tuesday (3rd Nov.): Italy
Wednesday (4th Nov.): Greece
Thursday (5th Nov.): Austria
Friday (6th Nov.): Austria
We’re going to publish videos of photos of the solidarity as available.
FREEDOM TO MAHIR AL-AKHRAS!
FREEDOM FOR PALESTINE!
INTERNATIONAL SOLIDARITY IS THE WEAPON OF THE PEOPLE!