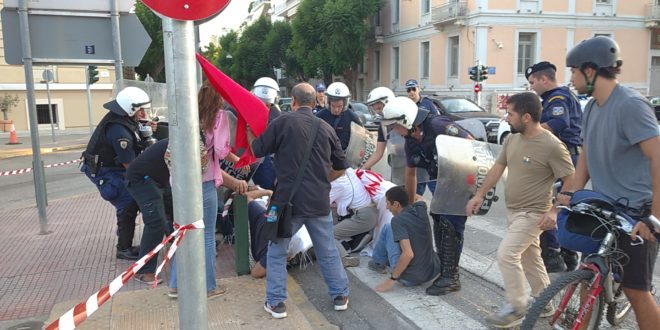 Today we had in Athens, gathering outside of Turkish Empassy, for Victory of the demands of Death Fast Resistance, of Didem Akman’s. Police attacked us they made also in gathering for our honourable Ebru Timtik and this shows obviously that police of Greek and Turkish state colaborate against the strugglers and that the resistance against fasiscm, imperialism, injustice and class unequality knows no borders.

RESISTANCE ALWAYS IS THE WINNER!
DIDEM AKMAN’S DEMANDS WERE ACCEPTED BY THE PRISON ADMINISTRATION!
Didem Akman will Live! Her demands were accepted short time ago by the prison administration for improvement of prison conditions and end of denial to her human rights!

Highest Tribute to the 4 resisters (Helin, Mustafa, Ibrahim, Ebru) who have give their lives in this struggle for justice in Turkey, shouting to the whole world that even the most fundamental rights of the people can be only gained by resistance.