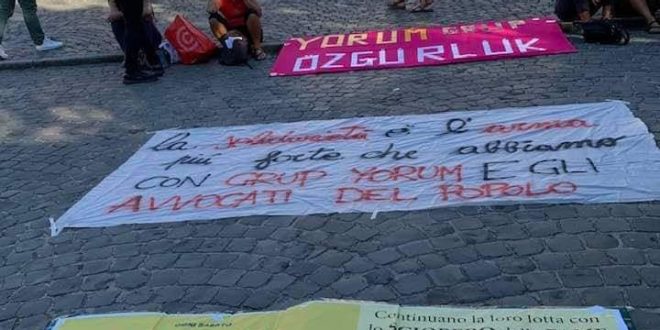 SOLIDARITY GATHERING WITH THE POLITICIAL PRISONERS IN TURKEY: Florence Rome

On Saturday 5 September in Florence and Rome, two solidarity garrisons were held with Turkish political prisoners promoted by the Berkin Elvan Cultural Centre and the Grup Yorum Solidarity Committee.
Political parties, lawyers, organisations and associations were present to pay homage to Ebru Timtik, who has just become a martyr, and to call for the release of the lawyers, members of Grup Yorum and political prisoners.
The fight does not stop there. The battle is not over. Aytaç is on conditional release, ready to be put back in prison as soon as his health does not improve. The fight continues. The next garrisons in Italy: Genoa on Wednesday 9 September and Rome on Friday 11 September. Resistance demands must be accepted! The martyrdom of Ebru Timtik is not only a loss for the Turkish people, but also for all the defenders of the law in the world.
Now we must continue the resistance struggle in all countries to prevent our Turkish brothers and comrades who resist fascist aggression from being given the same murder as Ebru, Helin of Mustafa and Ibrahim in order to have the right to a fair trial.
Ebru is immortal
Helin is immortal
Ibrahim is immortal
Mustafa is immortal
Aytaç is our honour
Didem is our honour 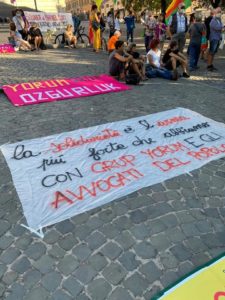 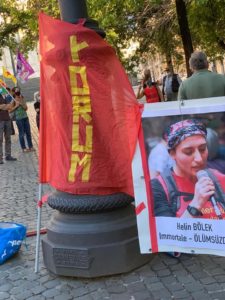 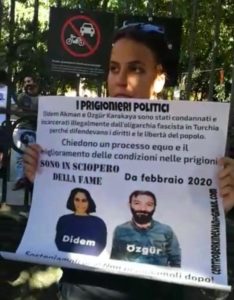 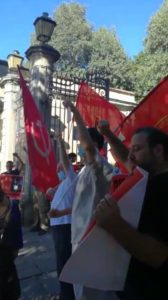