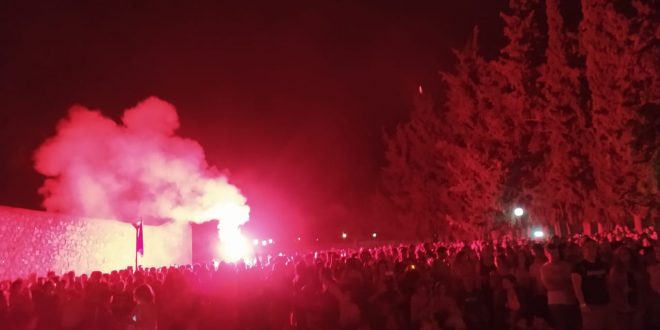 The resistance against fascism from the past till today is alive!

A big concert in solidarity with the band Grup Yorum and with the death fast resistance in Turkey was held in Athens on 21st July, 2020, at the historical “shooting range Kaisariani, where 200 communist prisoners of the German occupation forces were executed in 1st May 1944, refusing capitulation till the last minute.

Grup Yorum took the stage at this historical place along with several Greek musicians last evening.

The music of Turkey’s popular revolutionary band Grup Yorum is listened by millions of people around the world and puts itself in the middle of resistance and struggles of all sections of society against oppression and injustice. The repression against band members is stronger than ever. 2 musicians of Grup Yorum in Turkey lost their lives in a death fast fighting repression and especially concert bans.

The important role of the band in the people’s struggle for independence and freedom is not only indicated by the attacks of the government in Turkey, which bans their concerts, arrests its members, several times raided and destroyed their cultural center and handles them as terrorists, but also by the partial cooperation of some imperialist countries with this criminalizing policy.

Before the concert a pannel was organized with speakers of the Antiimperialist Front, the People’s Front, Grup Yorum, the Greek Solidarity Committee with Grup Yorum and also with the well known Greek artist and actress, former KKE (Greek Communist Party) deputy Eleni Gerasimidou.

Eleni Gerasimidou spoke about the resistance of Grup Yorum in the context that artists, musicians, ahead of their artistic works should also be part of the societal struggle.

The event was marked with international solidarity by many of the Greek peoples and musicians, who supported Grup Yorum during the death fast resistance.

With their revolutionary songs, the musicians which are loved and known in Greece saluted Grup Yorum, as well as the death fast martyrs Helin, Mustafa and Ibrahim.

The Grup Yorum Choir of Greece also sang a Greek version of the group’s popular march song “Hakliyiz Kazanacagiz” (“We are right, We will win”)

Revolutionary poet Hasan Biber read a poem, which he wrote for the death fast resisters and the traditional folk dance “Zeybek” of the Aegean region was performed in the event.

While the most favorite song of the immortalized band member Ibrahim Gökcek -“Ugurlama” (Farewell) was played, he was Saluted with fireworks.

This event once again showed the power of solidarity, fraternity and resistance. Internationalism and Solidarity, from Turkey to Greece, was demonstrated with the participation in this event by around 4500 people. 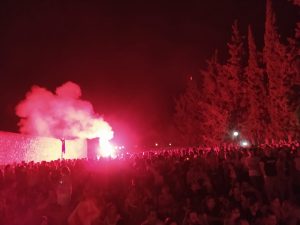