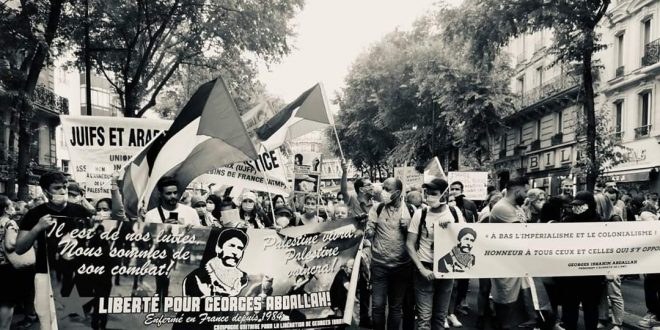 Statement by Georges Abdallah for Demonstration Against Annexation of West Bank 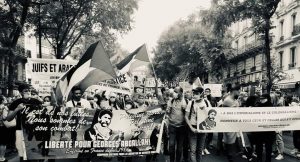 Declaration read at the end of the Paris demonstration, Saturday June 27, against the project of annexation by the Zionist entity of new Palestinian territories in the occupied West Bank:

In particularly difficult conditions, the Palestinian popular masses and their revolutionary vanguards have been fighting tirelessly since the late sixties. The emergence and the affirmation of the contemporary Palestinian revolution following the defeat of the Arab bourgeoisie and its various regimes in 1967, has certainly aroused the enthusiasm of the popular masses and of the living forces in the Arab world, especially in the Mashreq… However, reactionaries of all stripes never wanted, and cannot want, to cohabit with this revolutionary hotbed in this region and to guarantee in some way a real Resistance to the Zionist entity which, by the way, is not simply one instrument among many others in the service of imperialism for looting and domination of the region. It is, in fact, an organic extension of Western imperialism. This is why the struggle of the Palestinian people takes on a much more complicated task in the region than any other struggle for national liberation against traditional colonialism …

Since the very beginning of the 1970s, the liquidation of the Palestinian revolution has been on the agenda of the imperialist forces and their regional reactionary supporters. Wars and massacres have followed one another since and the popular masses have faced them with the means and capacities available … although the revolution was torn (it still is today) between two poles: one seeking endless negotiations and concessions at all costs and the other focusing on resistance by all means and particularly armed struggle. Innumerable battles have been fought, some have been lost, others have been won, but on the whole and despite all the losses and despite all the errors, the masses have been able to consolidate certain achievements of which nobody cannot today contest its strategic significance.

The Palestinian people are still there and the Palestinian cause is more alive than ever: a historic journey whose contours are drawn by the blood of the Palestinian Revolutionaries, the dynamic perpetuated by the premature engagement of these Flowers and other Lion Cubs of Palestine, and the ever-increasing light of the torches of freedom, these indomitable resistant Heroes captive in Zionist jails…

All are saying these days their rejection of the infamous Oslo Accords. Perhaps, it would be useful to point out that initiatives for any negotiations and at the cost of concessions, far from being negligible, have multiplied from the “intermediate program” called “ten-point program” to around 1974, at the height of the Palestinian struggle, and then the acceptance of resolutions 242 and 338 during the cession of the National Council in 1988 and finally Oslo, which was neither used to stop the colonization and the confiscation of Palestinian land or to prevent the ever accelerating Zionization of Al-Quds…

For more than 27 years, “they” have continued to harbor illusions about the establishment of a “truly sovereign State” over less than 22% of Palestine in the midst of an active colonization project, a colonization of settlement: the illusions of two “states” next to each other like old neighbors who have fallen out over a plot of land, the illusions as to the capacity of the Zionist entity to exist simply in time of peace and to establish other relations with the region (and not only with the Palestinian people), which would not reflect the interests of this “organic extension of imperialism.”

Since 1993, the Palestinian masses have been forced to endure horrible massacres and a genocidal siege and the detention of children and whole families not to mention the demolition of houses and other property, because a stratum of compradores was able to see their interests bloom at the end of the fantasized tunnel!!!

Certainly, it is not such a small matter to leave the swamps of Oslo, especially as the instruments of repression are essentially related to the mechanisms of the counter-revolution in the service of the Zionist occupier…

The Palestinian people and their fighting vanguards have accumulated throughout their journey of existential struggle what was needed to meet the challenge and continue the struggle until victory. The Resistance forces in the region are of such strength that one can say with confidence and without bluster: victory is more than ever on the agenda. Quite naturally, the masses and their vanguard fighting in captivity can count on your active solidarity.

May a thousand solidarity initiatives flourish in favor of Palestine and its glorious Resistance!

Solidarity, all solidarity with the resistance fighters in the Zionist jails, and in the isolation cells in Morocco, Turkey, Greece and the Philippines and elsewhere around the world!

Solidarity, all solidarity, with the young proletarians of the working-class districts!

Solidarity, all solidarity, with the Yemeni people!

Honor the martyrs and the popular masses in struggle!

Down with imperialism and its Zionist watchdogs and other Arab reactionaries!

Capitalism is just barbarism, honor to all those who oppose it in the diversity of their expressions!

Together Comrades and it is only together that we will overcome!

To you all, Comrades and friends, my warmest revolutionary greetings.