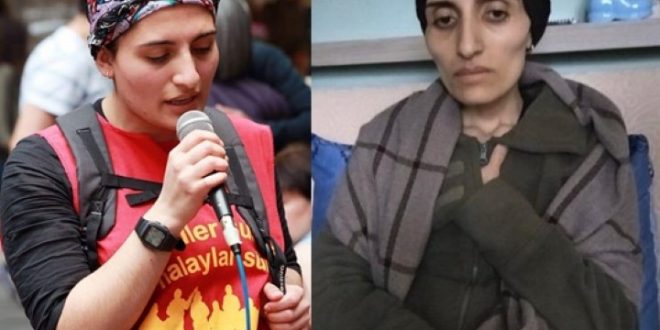 Helin Bölek, Turkish revolutionary musician and Grup Yorum band member, was martyred during the morning of Friday 3 April 2020 after 288 days of being on hunger strike. She was on hunger strike together with fellow Grup Yorum member Ibrahim Gökçek, who is continuing his strike now for 291 days.

Grup Yorum, established by students in 1985, is a revolutionary music band composed of Turkish and Kurdish members. Their songs are about the struggle for freedom, the daily struggles and international solidarity. Grup Yorum is one of the most popular bands in Turkey, with concerts being attended by hundreds of thousands of people. The band has been a target of Turkish state repression for a long time. Their offices and cultural centres have been raided multiple times and dozens of members have been arrested and tortured.

Three weeks ago, on 11 March, the house where Helin Bölek and Ibrahim Gökçek were on hunger strike was raided by Turkish forces. Helin and Ibrahim were taken to Ümraniye Training and Research Hospital to be force fed. Both refused all force feeding and insisted on their right to resist through their hunger strike. After six days of torture in the hospital, including stress positions and prohibition of sanitary facilities, Helin and Ibrahim returned to their Resistance House in the neighborhood Küçük Amurtlu in Istanbul.

The hunger strike of Helin Bölek and Ibrahim Gökçek aimed for more than their own freedom. Rather, they formulated five clear demands:

The death of Helin Bölek in the liberation struggle shows the deadly nature of the Turkish state, which continues to imprison tens of thousands political activists, lawyers, politicians, journalists and musicians. It is exactly against this system of mass imprisonment and repression that Helin Bölek was struggling.

When Samidoun participated in the Anti-Imperialist Symposium in February this year, we heard from Helin Bölek and people close to her. While it was clear her health condition was deteriorating, her spirit was extremely high. It was clear that she and her fellow hunger striker Ibrahim Gökçek would continue until their demands were met. With the martyrdom of Helin, it is our duty to continue her struggle and support Ibrahim and the Grup Yorum prisoners.

Samidoun Palestinian Prisoner Solidarity Network salutes the life and legacy of Helin Bölek, who struggled her whole life for people’s liberation in Turkey and Kurdistan. Her music, organizing and hunger strike has inspired thousands of people to stand up against Turkish state repression. We join all those who are continuing the struggle of Helin Bölek and we demand the immediate release of all Grup Yorum members and an end to their repression.

We end with the lyrics of Grup Yorum’s song “Zafere Kadar” (Until Victory), which was released in support of the second Intifada: