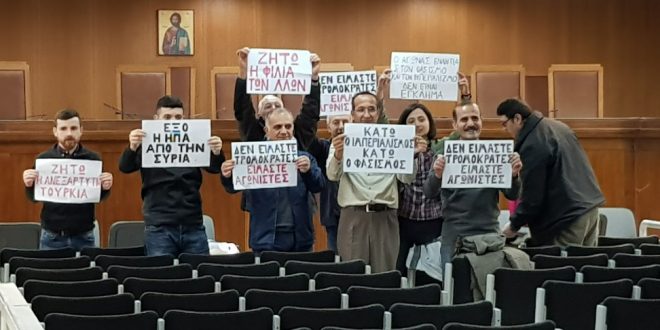 Eleven Revolutionaries From Turkey Arrested In Greece Have Been Jailed!
In the early hours of March 19, the collaborationist government of Greece, acting at the behest of imperialism and fascism in Turkey, sent hundreds of ski-mask-wearing armed police to raid a house where revolutionaries from Turkey stayed. The police attacked viciously and used torture to detain nine people in the house. Then they attacked the building in Exarchia where Halkın Sesi TV, Halkın Sesi Radio, Uyuşturucuyla Savaş TV and the Anti-Imperialist Front work in Greece, detaining 14 revolutionaries and torturing them, one of them being a Death Fast veteran who has difficulty walking.
Then they also arrested three more people they found on the street. The police sought to make it impossible to do any work in the association, confiscating all computers and technology as well as money.
The same evening some of the people detained were released, the remaining 11 held in the security department continued to be tortured. The following day the 11 revolutionaries were brought to a court after being made to wait for five hours handcuffed from behind, then they were brought back to the security department.
On Tuesday March 24, the 11 revolutionaries from Turkey were brought before an investigative magistrate who ordered pre-trial imprisonment.
The names of the 11 revolutionaries;
You cannot prevent history taking its course! History consists of class conflict. And in our day this conflict is between imperialism and the peoples. Capitalism’s sell-by date has expired. Capitalism’s highest stage, imperialism, has rotted and can offer the peoples of the world nothing other than blood and tears. It has spilled blood in the four corners of the earth… It is imperialism alone which bears the responsibility for all the pain, tyranny, exploitation, poverty, unemployment, corruption and illness of the peoples… All policies of imperialism are in every way the enemy of the peoples of the world.
This is the world in which we live. In such a world it is imperative to fight imperialism and its local collaborators, to wage a struggle that delivers them to the dustbin of history; a duty for all who consider themselves to be human beings.
While imperialism and its local collaborators attack the peoples with all the means at their disposal, exploiting them to the marrow, causing their blood to flow in the gutters, they attack even the slightest search for justice with savagery in an attempt to silence people… Remaining silent means to approve of what is being done.
The world will not remain theirs; it is the peoples who resist and struggle who will win!
We are right… With the strength of our historical and political rightness and our entire legitimacy we stand up to imperialism and its local collaborators. They try to pin the label “terrorist” on us, but the biggest and real terrorists are imperialism and collaborationist fascist governments.
It is an honour to struggle against imperialism and fascism. It is a duty for every patriot and Marxist-Leninist to struggle against imperialism and fascism. We have this honour. And we have limitless belief that we will bury imperialism in the dustbin of history…
We are building up the hopes of all the peoples of the world and especially those in Anatolia. This is the reason imperialism attacks us, as it has proclaimed that “we will not allow the Marxist-Leninist ideology to be a source of hope again for the peoples of the world”. They do not want us to be hope. They know well that the only force that can tear down their hollow system of rule is Marxism-Leninism. That is the goal of their raids, detentions, imprisonment and massacres; they seek to stop us from being the hope of the peoples. But thwy will not succeed in this… Under every condition, we will continue to fight, struggle, spread our struggle throughout the world and build up hope…
It Is Not A Crime But A Duty To Struggle Against Imperialism And Fascism!
Repression, Detention, Imprisonment Cannot Intimidate Us!
Down With Imperialism, Down With Fascism, Long Live Our Struggle!
We Will Continue To Be A Source Of Hope!
We Are Right, We Will Win!
People’s Front (Greece)
Anti-Imperialist Front (Greece)
24.03.2020