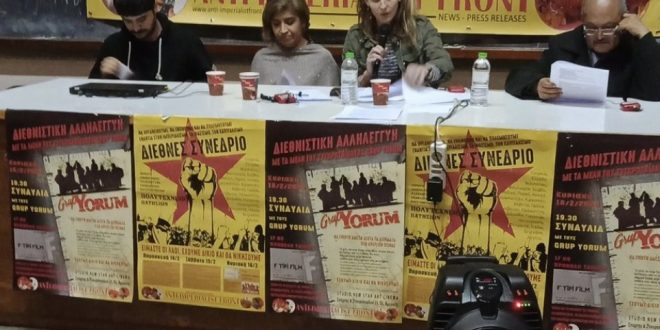 The Final Declaration of the AIF Symposium

1 – The domination of imperialism has increased more in our world today, and as a result of this, the dimensions of imperialist occupation and aggression, imperialist exploitation and hunger have grown enormously.

On the other hand, the anger of the peoples of the world against imperialist colonialism and capitalist system has grown just as much, and imperialism has nightmares of revolt.

The policy of imperialism in response to this has been to dissolve the potential for revolt of the peoples, their revolutionary dynamics, channeling them within the capitalist system, to use them for the sovereign interests of imperialism, to corrupting them and control it ideologically, politically and culturally.

We, as the organisations participating in the Anti-Imperialist Front Symposium, declare that,

In this context, we, as participants in the Anti-Imperialist Front Symposium, will take a stand against the attacks of imperialism on peoples wherever they are in the world. We will demonstrate our anti-imperialist attitude in various forms, especially to protest imperialist attacks with a common statement.

2 – We aspire to create an Internet TV channel for the AIF to disseminate its message and to contradict the imperialist media.

3 – The criteria for being a revolutionary and progressive are to be anti-imperialist and anti-fascist.

4 – In a world dominated by imperialism the only alternative is socialism:

Fascism and racism are growing all over the world.

We say that the only way to change this picture and solve the problems of the peoples today is through socialism, and today the only alternative to the imperialist system is the socialist one. For this reason, we say that for the success of the struggle against imperialism, this struggle must be carried out with a perspective aimed at the liberation of the peoples from the capitalist system.

5 – We salute political prisoners of the world and extend our solidarity, mentioning in particular among many others Georges Ibrahim Abdallah, Abimael Guzman, Ercan Kartal, Ali Osman Köse, Hüseyin Özarslan and Julian Assange. They are all victims of imperialist oppression and tyranny.

Ibrahim Gökçek and Helin Börek, members of Grup Yorum oppose the attacks of fascism in Turkey’s prisons and abroad, and support the demands of Mustafa Koçak, who continues his resistance by Death Fast for justice, and we want their demands to be accepted immediately.

For this reason, we, as participants in the Anti-Imperialist Front symposium support the hunger strikes of the lawyers of the People’s Law Bureau who are in jail and will have been on hunger strike for a month as of March 3. On that day, we will carry out a 1-day hunger strike in the countries we are in and we will encourage others to participate. We will make videos of our hunger strike and share them online.

Under the rule of imperialism and fascism, prisons have always been places of massacres, persecutions, torture and resistance.

A major massacre was carried out simultaneously in 20 prisons in Turkey on 19/22 December 2000. 28 revolutionary prisoners were massacred, six female prisoners were burned alive.

Why was the massacre carried out?

Imperialism has imposed “change your beliefs or die” all over the world.

The massacre was committed to get the prisoners of the Front to change their beliefs.

In Turkey’s prisons, the prisoners of the Front resisted this attack and did not submit.

Therefore, the massacre of 19-22 December 2000 and the resistance of the prisoners of the Front plays an important role in the struggle against imperialism. It is to commemorate the political prisoners who were murdered in prisons all over the world on December 19-22, to lay claim to the struggle against imperialism and fascism and the values we created.

We therefore accept December 19-22 as days of remembrance for political prisoners all over the world.

6 – Each struggle develops on the values it creates.

Those who have been martyred in the revolutionary struggle of the whole world are our common values.

In this real move, we, as participants in the Anti-Imperialist Front Symposium, announce that we will organise commemorations of the martyrs of revolution in our own countries and in the world.

7 – We will fight against drugs and all kinds of decadence as they are among the means imperialism uses to establish sovereignty in the world.

”Drugs are the poisoning of poor people at the hands of imperialists ” Ho Chi Minh.

The three main objectives of imperialism’s drug policy are:

8 – It was revealed last year that the world has seen the largest wave of refugees since the Second World War. It is imperialism that drives people to become refugees, often ending up in refugee camps if they do not drown in the Mediterranean or meet with other disasters. We oppose imperialist wars and economic policies which force people to abandon their homes in search of safety and of a way out of misery, and embark on a risky way, if does not take their lives, it takes their human dignity in form of racist, ethnic and religious discrimination once they reach their destination.

9 – We strongly condemn sanctions and blockades against countries like Cuba, Syria, Iran, Venezuela, the DPRK that are being targeted in this way. The sanctions imposed onto countries which resist imperialist policies are just as inhumane and destructive as a war, causing slow and torturous death of hundreds of thousands of the most voulnerable.

10 – We strongly condemn the imperialist resort to drone assassinations and murderous attacks of a similar character, such as the murder of Iranian commander Qassem Soleimani and others at the start of 2020. Most of these drone attacks are coordinated and set in motion from the US imperialist base at Ramstein in Germany. We demand the closure of Ramstein and every other imperialist military facility in the world.

12 – We condemn the fascist junta in Kiev and express solidarity with the anti-fascist people in Ukraine and with the resistance in Donbass. In Ukraine, the communist party is banned and its members are prosecuted. There is an ongoing process of “decommunisation”: the street bearing names of communists are being changed and communist monuments destroyed. At the same time the military actions against Donbass are in progress. At the time of this declaration, a comrade from “Ghost” brigade were killed in Lugansk.