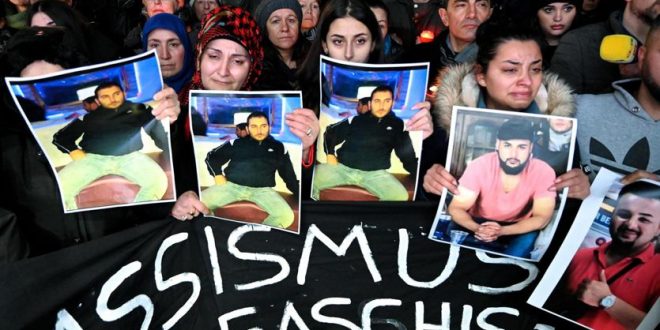 The massacre in Hanau: the effects of chauvinist and xenophobic policies

Every massacre, every terrorist attack and murder in the world is signed by fascism and imperialism.

What happened from Hanau, in Germany, is only the latest manifestation of this ideology that strikes and spreads without any filter or legislative limit. Tobias Rathjen, a 43-year-old German man, entered two different cafes in the city frequented mainly by citizens from other non-European countries, opening fire.

Then he returned to his home, killed his mother and committed suicide. Provisional balance sheet: 11 dead and several injured.

Among the victims, all of foreign origin, are mainly Turks and Kurds. According to the media, the assault in the two cafes was carried out by a man suffering from a serious psychic illness, but he had a weapons license and openly sympathized with the neo-Nazi fringes, he incited racial hatred on the social media and last year he wrote a manifesto calling for the total destruction of most countries in North Africa and the Middle East.

After the massacre, a note found in his house said “Arabs and Muslim Turks must be exterminated”.

The massacre is part of a disturbing trend of prosperity of violent fascist and racist attacks.

But it could not be otherwise, since there are (not only in Germany) extreme right-wing parties such as the Alternative für Deutschland (Alternative for Germany, Afd), which feed undisturbed racial tensions.

In the heart of Europe grow the black hearts of neo-Nazism. If, as usual, the Nazi-Fascists are described as “mad”, but only after they have massacred or killed someone, it is emerging as well as within the state apparatus, particularly in the police and the army, neo-Nazi cells have been created.1

While criminalization, repression, persecution and blackmailing of left, antifascists, especially organized left political migrants is increasing, nazis and extremely right wing groups and people linked to them can freely move and were enabled again to kill innocent people.

Racist motivated, discriminating and fascist ideas can’t be put on a level with those of the antifascist movement. Fascism is a crime, it’s a human duty to fight back!

FREEDOM FOR ALL POLITICAL PRISONERS, WHO ARE CHARGED AND ARRESTED FOR THEIR ANTIFASCIST, ANTI-IMPERIALIST POLTICIAL IDEAS AND DEFENSE OF FREEDOM STRUGGLE!

The Anti-Imperialist Front expresses its condolences to the victims of the xenophobic and fascist massacre in Hanau, Germany on February 19, 2020. Attacks like this are merely the sharpest expression of the growing fascism in Germany and indeed Europe, often expressed at the ballot box in votes for far right parties.
This is also against a background of official apathy about fascist murders, especially in Germany, and a tendency to see them as the deeds of individual lunatics. As Patrik Köbele, chair of the DKP (German Communist Party) noted, garbage cans allegedly set on fire by the left are placed on the same level as fascist murders.
The Anti-Imperialist Front calls for the greatest possible unity of action among anti-fascist forces to confront the fascist wave, of which these murders are merely the latest example.