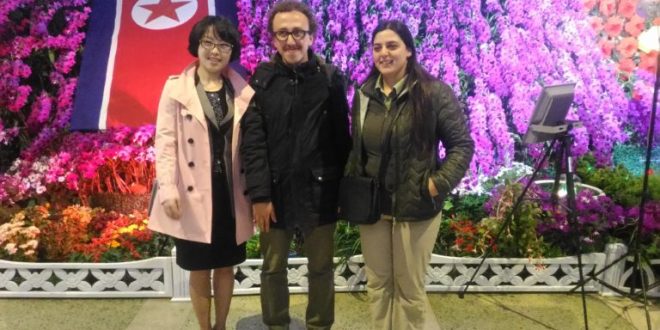 Visiting North Korea is not a crime!

Reason; A slanderer-police collaborator Berk Ercan says in his police statement; “Under the name of Anti-Imperialist Front, radio broadcasts, written statements, and various activities are organised with organisations in other countries. I know that in 2017, Naim Eminoğlu, connected to this organisation, went to North Korea and met with government officials “

Travelling to North Korea is legal and legitimate!

What is illegitimate, is cooperating with the murderer of the peoples, the US imperialism!

We will grow internationalism, and we will organise the victory of the peoples of this world with our ML ideology!

While Naim Feyzullah Eminoğlu was a trainee lawyer of People’s Law Office,

On April 13, 2017, he participated in the 105th birthday of the traditionally held birthday events of Kim Il Sung, the founder of the Democratic People’s Republic of Korea (DPRK).

7 months later, on October 12, 2017, he was arrested due to the false statements of police collaborators. The only claim about him was his visit to “North Korea”. Naim Feyzullah Eminoğlu was released on December 24, 2019, after 27 months of imprisonment.

AKP fascism said that going to North Korea within the framework of Anti-Imperialist Front is proof that he is a member of DHKP-C.

Anti-Imperialist Front is the most legitimate organisation in the world. It fulfils the world’s most legitimate business, the task of organising the peoples’ common struggle against imperialism and fascism.

AKP fascism justifies its allegations by making a slanderer like Berk Ercan sign witness statements and it uses these to imprison Lawyer Naim Feyzullah Eminoğlu to 27 months in prison.

According to which law in the world and in Turkey is going to North Korea a crime?

Even according to Turkey’s fascist laws, it is not illegal to go to the Democratic People’s Republic Korea, and there is no definition of such a crime to travel to another country. However, this does not matter for AKP fascism. The main thing is that Lawyer Naim F. Eminoğlu is an employee of the People’s Law Office, he is a lawyer with revolutionary ideas. This is what AKP fascism considers “crime”. Travelling to the Democratic People’s Republic of Korea is considered to be a “crime” because it was seen as an expression of revolutionary and socialist preferences.

No, it is not a crime to travel to a socialist country, even in the laws of Turkey’s fascism there is no definition of such a crime. On the contrary, it is a crime to cooperate with imperialist countries, especially US imperialism, which is the enemy of the peoples of the world, which causes starvation and bloodshed. It is a crime to market our homeland to imperialism.

Kim İl Sung has an honour that AKP fascism can never reach. He is a person who led a revolution to save his country from being trampled under the boots of imperialism and its people from being crushed under the exploitation of imperialism. For this, he has a respectable place in the eyes of all the peoples of the world. It is an honour to participate in an event organised for revolutionary leader Kim Il Sung. Dishonour is to bow in front of the imperialist masters, Bush, Clinton, Obama, Trump.

Ensuring The Unity Of The Peoples Against Imperialism And Fascism Is Not A Crime, But An Honourable Duty

Being A Worker Of The Anti-Imperialist Front Is Not A Crime, It Is An Honourable Duty

AKP fascism also criminalises the unity, solidarity and common struggle of peoples against imperialism and fascism. This is why it is uncomfortable of Naim F. Eminoğlu’s visit to the DPRK. It is also uncomfortable with the work that Anti-Imperialist Front carries out.

The crime is not to fight against imperialism and fascism, to organize and to unite the peoples. On the contrary, the crime is to fill the four corners of the world with the military bases of imperialism and to knit a network of monopolies.

The world’s criminals are imperialists and their collaborative fascist powers. It is the USA, the AKP.

The honour of the struggle against these criminals is the Anti-Imperialist Front.

The honour of the fight against these criminals is carried by noble revolutionaries such as Lawyer Naim F. Eminoğlu. The oppression of fascism and its persecution cannot prevent Anti-Imperialist Front from fulfilling this dignified task.

As the Anti-Imperialist Front, we take a step further while carrying out this honourable duty, and we are bringing dozens of organisations and revolutionaries from 21 countries of the world together in a symposium. The symposium that we will hold in Athens, the capital of Greece, on February 14-16 will be a step that will increase the unity and struggle of the peoples against imperialism and fascism.

Let’s organize against imperialism and fascism in the ranks of the Anti-Imperialist Front, LET’S UNITE; LET’S FIGHT, LET’S WIN!