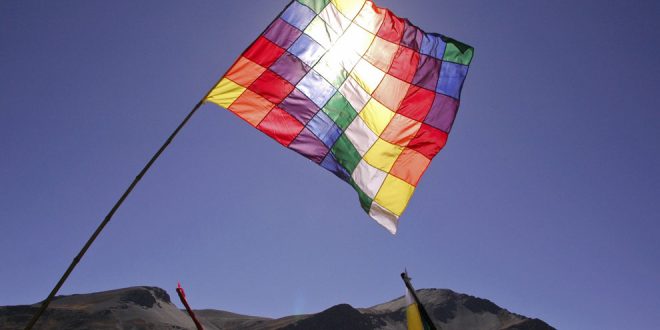 Anti-Imperialist Front stands together with the resisting people of Bolivia

Coup d’etat has been carried out in Bolivia. Within short time after trying to please the USA-backed right-wing opposition by proposing new elections, the armed forces of Bolivia including the military and the police, “suggested” Evo Morales to resign. In order to stop the escalating violence and bloodshed, he accept the “suggestion”. It is clear that the issue at stake was not the electoral result nor the bourgeois notion of democracy, but rather the progressive policies of Evo Morales and his government. In other words, the issue at stake are the obstacles to the accumulation of capital, and to the drain of Bolivian wealth by the imperialists and it’s comprador puppets.

Unfortunately, Evo was mistaken about the violence. His resignation did not stop it. His own residence was sacked and his belonging set on fire. Right-wing gangs are organising repression of the left-wing activists. Members of Evo’s movement are being lynched. Apart from this immediate consequences, the upcoming neoliberal reforms will produce a reversal in the policies causing long-term process of immiseration, wretchedness, increasing discrimination and inequality. Immediate violence will be substituted with long-term systematic violence and repressionto guarantee maximal exploitation of the people of Bolivia, especially that of indigenous communities and their natural resources.

The only thing that history has known as an alternative to coups is the organised resistance of the people. With his resignation Evo gave up on the possibility of the organised response to the putschists, he did not deposit his trust onto the people of Bolivia to protect it’s sovereignity. However, the indigenous people of Bolivia organised self-defense and spearhead the resistance against the imperialist puppets. The anti-imperialist avantgarde of Latin America are it’s indigenous people.