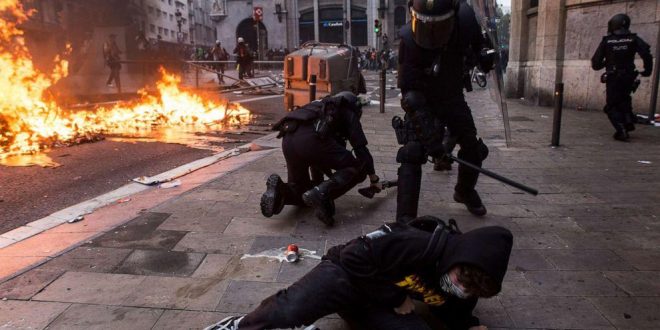 The uprising in Catalonia bears more complexity than the recent uprisings that we are witnessing in the neocolonies where the objective is either to have a “colour revolution” to counter the determination of the local government to stand up to the imperialist policies, or where the contradictions of imperialist policies in the shape of neoliberalism have caused the people to resist being bogged down in misery. The complexity of the Catalan uprising comes from the fact that it is taking place in the richest region of an imperialist country, Spain, being in turn one of the early members of an international imperialist structure known as European Union.

Spain is a monarchy which inherited its state infrastructure from the Franco’s fascist state in totality: the repressive apparatus, the army and the legal system. The so called “transition” to democracy ensured the immunity of fascism and it was carried out under the tutelage of USA which made sure that the new, “democratic” Spain remains as its strategic partner. The only thing that the transition brought was a makeover in form of a constitution and a parliament. Its loyalty to the imperialist project has remained unchanged as well as its esteem for its fascist heritage.

Catalonia is the richest region of Spain contributing around 19% of Spanish GDP (2017) and it is considered to be one of the “four motors of Europe”–the other three being Rhone-Alpes in France, Baden-Wurttemburg in Germany and Lombardy in Italy. Ethnically, Catalans have their own national identity, culture and language which are different from the rest of Spain.

The main drive for the independence comes from Catalan bourgeoisie as the investment of the central government of Spain does not match the contribution of Catalonia to the budget. In other words, Catalonia gets less money from Spanish state then they contribute.

From the class perspective, in reality there is no class unity between the Catalan and the Spanish peoples. Revolutionary and progressive organisations are marginal rather than an objective force in both societies, while the mainstream political options on both sides are strongly and irreconcilably divided by their own nationalism. That being said, the class basis of the Catalan uprising and the drive for independence is bourgeois under the leadership of reactionary forces.

Reactionary character of its leadership is obvious from the lack of demands to break with capitalism and exit imperialist political and military structures (EU, NATO, etc). Indeed, the aim of this movement is not to weaken the imperialist system, but to improve its own position in it. In other words, Catalan bourgeoisıe seeks to leave Spain in order to remove impediments to the capital accumulation. Such an objective, logically, implies strengthening of the existing order.

The response of Spain to the demands of the people of Catalonia has been worthy of Franco. Spanish state responded with brutal repression and violence against the protesters and disproportionate prison sentences for the organisers of the referendum. The entire political establishment of Spain, from the extreme right to the parliamentary left denounced the referendum and the reaction of the people of Catalonia that followed while expressing solidarity with the repressive forces of the state as if they were the ones on the receiving end of the rubber bullets, truncheons and tear gas. Clearly, Spain is not coherent when it comes to delivering democracy that it expects from other countries in their internal affairs.

The objectives of the Catalan nationalist movement are one thing, and possible outcomes are a completely different matter that does not depend on the will and desires of Catalan people.

Catalonia’s main market is Spain (20% of Catalan enterprises export). Its main export market is EU, as well as the biggest source of imports (both around 70% of the trade volume).

EU sided with Spain and made it clear it wouldn’t recognise independent Catalonia if the process is not according to the Spanish constitution. Apart from that, in earlier occasions EU stated that a region leaving a EU member state also leaves EU. That would effectively cut Catalonia off from its main markets and investments, while making their products uncompetitive due to customs barriers they would face for not being member of the Union.

It is not likely that Catalan economy would be sustainable unless it manages to substitute Spain and EU with foreign markets. However, that would require strong state in order to compete with other imperialist countries to secure markets in a world which has already been divided. In a period of crisis and increased intra-imperialist competition, this is unlikely that any imperialist state would cede in front of Catalonia.

USA also considers Spain to be its most reliable partner in Europe and it is not probable that it would put its interests in danger by supporting Catalonia. Spain hosts key US weapons, such as the anti-rocket shield in Rota military base. Also, Spain is very diligent in fulfilling NATO and especially US objectives wherever needed.

However, it doesn’t mean that the economic impact of Catalan independence would be limited only to Catalonia itself. Spain would be crippled by the loss of its biggest source of revenue and that would heavily impact EU politically. Given that the EU has a common currency, any sort of political instability would provoke loss of confidence of the markets and consequently a withdrawal of funds and value.

What is of key importance for us as anti-imperialists is the effect it would have on neocolonies and the imperialist system as a whole.

While this would impact the global position and strength of EU it would not have an important effect on the imperialist system. Any kind of weakness of EU would be used by its competitors to their own advantage, effectively rendering the situation the same as before.

It might be possible that a crisis in Spain and EU would briefly open a window of opportunity in the dependent countries where Spanish/EU grip is the strongest, but that would largely depend on how fast other imperialists react to take over.

From the class perspective, although there is no relevant revolutionary or progressive left organisation, the crisis might create an opportunity for such an organisation to appear. Independence of Catalonia would also mean a democratic victory over Spanish fascist state, effectively meaning weakening of fascism and empowerment of democratic movements and institutions. Combined with the possible economic crisis and a fall of Spain in the hierarchy of the imperialist world order, this situation could become a solid basis for deeper changes.

The risk is that the progressive forces do not seize the momentum and allow fascist forces to take over with possibility of a military coup. Another risk is related to the capacity of Spain to compensate the impoverishment of its people by redistribution of wealth created exploitation of neocolonies in order to “buy” internal peace (this is the role of the pro-imperialist left such as Podemos) and intensifying that exploitation.

We as anti-imperialists have to take the following attitudes:

Imperialism is a global system in which all countries, economies and struggles are mutually connected while at the same time individual anti-imperialist movements focus only on their own struggle within national borders. For anti-imperialist struggle to be effective it must cross the borders and join together all peoples that are related through the political and economic links between their countries.