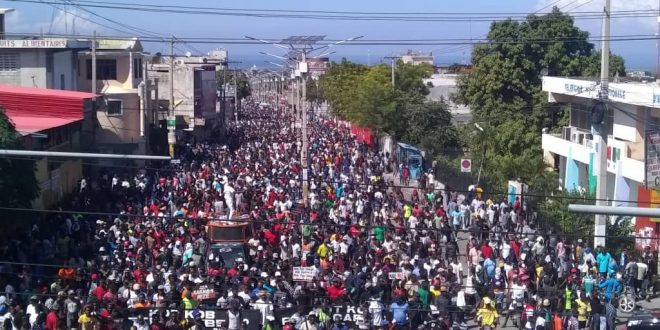 The Anti-Imperialist Front Supports the People of Haiti

The Anti-Imperialist Front salutes the resistance of the people of Haiti to the imperialist puppet Moise, and expresses solidarity in their just fight against imperialist oppression. The Haiti uprising is ignored by the mainstream media which is hardly surprising. The media would prefer to concentrate on the protests such as Hong Kong which support geopolitical interests and colonial projects of the imperialist states. However, the fact that the world left remains silent while people’s anti-imperialist struggle in Haiti is at its highest point is very worrying. We as anti-imperialists cannot remain silent and ignore what could be one of the most important events of this decade when it comes to struggle against imperialism.

What is going on in Haiti? The US-backed and Jovenel Moise-led reactionary government of Haiti, in order to please their imperialist masters, has suspended the aid which came through Venezuela’s PetroCaribe programme. The programme was meant to provide financial resources for infrastructure investment, and also discounted petrol on credit. Not only was the programme stopped, preventing any kind of improvement of Haitian society, the government officials drained the financial resources into their own pockets. This situation has caused fuel shortage and consequently price increases as an addition to the misery of the people of Haiti.

The people of Haiti rose up against this situation and feels itself to be on the brink of victory. The Anti-Imperialist Front urges to extend international solidarity and support the people of Haiti, and calls all people that are exposed to imperialist aggression to unite and support each other and to overcome the limitations set by borders.