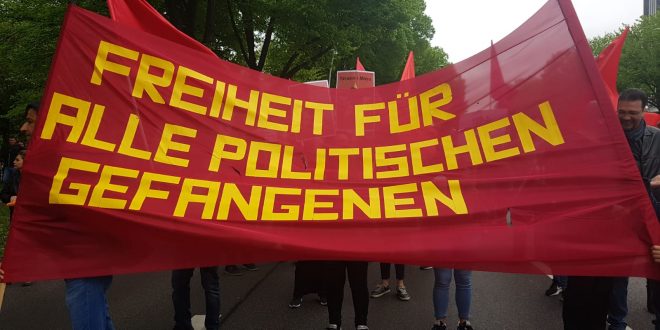 Political prisoners in Germany and problems of solidarity

Earlier, 25 years ago, there were collectives of prisoners from the RAF.

The most famous German prisoner is Thomas Meyer-Falk. Arrested in 1996 and several years in solitary confinement. Condemned for bank robbery in order to obtain money for legal and illegal left political projects.

Since the end of his sentence, he has been in preventive detention since 2013, i. a dismissal is incalculable.

As an example, we would like to comment on the conditions of detention of Musa Aşoğlu, who was arrested in December 2016 in Hamburg because of §129b.

He is alone in his cell for 23 hours and the farmyard walk for 1 hour will soon leave him alone for two years.

Meanwhile, he can do yard walk with a social prisoner.

He is in a prisoner-of-war section for 18 detainees. However, there are only 2 prisoners, so that he does not hear anything from the others in this department because they are far away from him and between him and other prisoners 3 – 4 cells are not occupied. In addition, there is also a strong fluctuation.

The political prisoner Erdal Gökoğlu, who is imprisoned in the same jail, is in other departments, so that no contact with him is possible.

Musa’s cell is down in the basement. He can not see rallies. He can only hear something when the window, which is 1 meter high, is open.

Due to the distance he can not call back.

Post Office Letters take a long time (over 1 month) and are sometimes confiscated, so mail to him and from him. Letters to him should be numbered to give a better overview of censorship.

So he does not get the Yürüyüs, which is allowed even in fascist Turkey, but not in “democratic” Germany.

The intention of the class justice system is therefore to restrict or impede its communication in order to aggravate its isolation even further, which in the long run can lead to damage to health.

Meanwhile, Musa is sentenced to 6 years and 9 months, the highest sentence in a §129b trial.

The FRG is also involved

The Federal Republic of Germany once again proves by the arrest of Musa Aşoğlu how consistently it pursues its interests as an imperialist power and as a supporter of reactionary rulers. As the most important supplier of weapons and business partners, the FRG has made a not insignificant contribution to the fact that Turkey was able to murder and displace thousands of people as part of its dirty war in the Kurdish areas. For this reason alone, we should not be surprised by the local criminalization and prosecution of liberation and independence movements.

There are delicate approaches of joint action, e.g. in gagging of different spectra, e.g. in Hamburg. There, joint actions take place monthly in front of the detention center, where in addition to the No-G20 activist Loic Schneider, Erdal Gökoğlu and Musa Aşoğlu are imprisoned, who are imprisoned because of §129b. However, after nearly 20 years, it is obvious that it is difficult to get together between native and migrant leftists. It is a fact that more people behave to the No-G20-procedures than to the §129b-procedure.

What are the causes?

The German and immigrant left have a different cultural and ideological background. In everyday conflicts, they have little to do with each other, and therefore, both contexts are better kept to each other instead of dealing with each other.

There are mutual accusations, such as dogmatism or “martyr cult” on the one hand, and anti-communism and eurocentrism on the other. Fact is, as long as it is not talked about, nothing clears up. Especially in the fight against repression, it is important to meet the blows of the class enemy together. First, the ideological differences should be secondary.

But how are the differences to be clarified? From our own experience we know that clarification, if it is wanted, is only possible by talking together. So the key to coming together is communication, which can then be the basis for a common practice.

Of course, the differences are not just about the “big politics”, but about conveying the ideas and values that make up the whole life: work, living, relationships, culture …

The cops and secret services are watching closely for mutual learning.

In 2008, the constitutional protection Baden -Wurttemberg warned “of a cooperation of migrant and domestic left!” Shortly thereafter, the arrests of Cengiz Oban and Nurhan Erdem, which disappeared for years in prison for §129b.

So let’s intensify the joint work on prisoners. Let’s see that as a chance to come together. By the way, it’s not about their freedom, but about ours too! Every success is always a victory for us all over the strongest European power in Europe, the FRG and the fascist government in Turkey. We have the experience that these governments are not almighty, so vulnerable.

Paper tigers do not live forever!
Network freedom for all political prisoners, Hamburg

ENGLISH Greek-Turkish bourgeoisie (or competition among the capitalist classes) competition and public health and economic ...