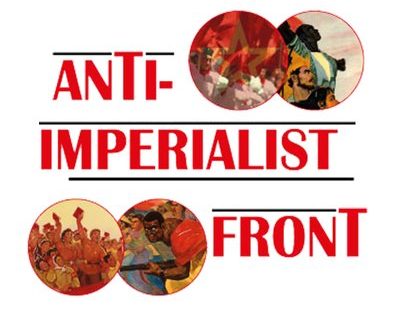 No matter how much hunger, famine and wretchedness there is in the world, the only responsible is only the imperialism and the capitalist system.

The imperialism in numbers:

Although the USA has only 6% of the world population, it owns 50% of the total world income.

(More then half of the world’s military spending.)

– According to the US Defense department, there are 702 US military bases in nearly 130 countries.

Besides, USA has 6000 military bases on it’s territory.

– In numbers, there are 845,441 buildings related to the US Defense Department.

While the second largest amount in the USA budget is the education with 45 billion dollars, the defense spending is 596 billion.

In the other countries in the world:

– in 63 of them there are both soldiers and the bases;

– after 9/11, 13 new USA bases were opened in 7 countries and finally in Syrian Rojava region 25 new bases are added to the count.

According to the official numbers, there are 821 million hungry persons in the world!

Every year 1,3 billion tons of food is thrown away!

While the rich throw the food away, millions are hungry!

They call it “insufficient nourishment”!

The explain that the cause is “drought and climate change”!

The estimates for the whole world:

5 of the 10 biggest investment banks,

42 of 75 biggest brands in telecommunications,

According to an investigation made in 2001:

According to the research by FORBES journal in 2018:

the 7 of 10 richest persons in the world are Americans.

THE RESPONSIBLE FOR OUR HUNGER IS THE IMPERIALISM!

Hungry ones are the poor and the oppress peoples. Their numbers reach billions.

While the imperialist capitalist system’s exploitation and striking culture of consumption creates numbers of nearly 2 billion obese, on the other side it suffocates billions with hunger.

Especially USA imperialism, in 2011 it attacked Syria wanting to bring it into the position of a “neo-colonial country”.

It tried to show it’s intervention over there as just and it bred the Islamist gangs such as El Nusra and ISIS.

Syrian people is under attack for seven years, it was massacred, it was forced to abandon it’s land, it’s country was set on fire, destroyed and converted into ruins.

Yemen, a country of only 26 million people has been under attack since 2015.The imperialism which made the excuse of ISIS to intervene in Syria, in Yemen it uses the Shias that took the power of government in Yemen.

It uses Saudi Arabia as the most loyal manservant for the attack.

However much the imperialist press reflects the attacks in Yemen against the Iran backed Shias as attacks against Sunni Saudi Arabia that is being under “threat”, the reality is quite different.

In fact, for many years ın Yemen democratic people’s government influenced by the Soviets has been kept alive…

Behind the conflict such as the one reflected by the Shia-Sunni conflict, are the imperialism’s interests. It wants to convert Yemen into a neo-colony towards it’s own desires and place a collaborationist government such as the one in Saudi Arabia, Jordan and Turkey.

The pain of the Palestinian people, ever since the El Nakba, that is, since May 14th 1948, didn’t start hurting.

Currently, it lives in a real open prison by being split in two, being surrounded by walls and with it’s neighbours’ borders closed.

They are slaves in their own country. Yet, this is not enough for Israel. Five million Palestinians live abroad, and Israel wants to get hold of them all.

Because of this, in spite of not having a trace of legitimity of this in the international law, the settler units of Israel are continuously expanding. In fact, it expands it’s occupation of the Palestinian lands.

Due to the being massacred in the Israeli bombing raids on one hand, and on the other hand due to the consequences brought by the lack of the medicines, food and excess of poverty, the people of Palestine dies by tens and hundreds.

We demand the abolition of the Israeli state and the return to the state before the El Nakba.

We are not anti-semites. Jews also have right to live on those lands. However, the Israeli state is Imperialism’s extension on the Middle East, it’s police station. While there is Israel, there is no peace nor happiness for the Palestinian people.

We are again underscoring that we have not a slightest problem with our Jewish brothers. We do not approach people by the religion, race or nationality, we do it by the class.

We are against the Zionism and for that reason we want the removal of the Israeli state.

NATO backed Ukrainian fascist state continuously hurls threats of attack towards the people of Donbass that separated from Ukraine and unilaterally proclaimed independence. Not only did they kill Donbass leader Zakharchenko, but they also keep piling up forces on the border and threat the people with massacre.

Progressive governments such as Nicaragua, Venezuela, Bolivia and socialist administration such as Cuba in Latin America that the imperialism sees as it’s back yard, are continuously being threatened. In order to topple the Maduro’s government, it imposes economic sanctions, creates collaborator opposition and by the means of them it tries to organise a coup.

From Western Sahara to Yugoslavia in the 90s, from Afghanistan to Iraq in 2000s, from Libya to Syria in 2010s, from Yemen to Venezuela, the imperialist attacks make our rage grow and our solidarity with the attacked countries even bigger. The history is the witness of the revolutionary and solidarity actions that the Marxist-Leninists carried out against those attacks…

We as Anti-Imperialist Front want to put an end to all those imperialist attacks!

Musa Aşoğlu and Ayten Öztürk: two members of People’s Front, two veterans of the Anti-Imperialist Front (AIF). Both of them are currently imprisoned.

Musa Aşoğlu is one of the biggest veterans of AIF. He is a revolutionary who spent intensive effort in order to bring the internationalism to life.

If today we have things such as AIF, symposiums and meetings, then his share in it is big.

In December of 2002, second international Symposium was organised in the Dutch city of Noordwijk. Well before year 2002, he participated in the international activities and he himself organised them in Amsterdam.

Because of that he became a target of the imperialism.

When there are no clear declarations, proofs, documents etc. the USA issued an arrest warrant on him on the grounds of the fighter Alişan Şanlı’s self-sacrifice action on February 1st 2013 against the USA Embassy in Ankara.

While putting forward the claim that Musa Aşoğlu issued an order for Alişan Şanlı’s sacrifice action, furthermore all within banditry and injustice, it placed 3 million dollar prize on his head.

He gets arrested and imprisoned in Hamburg on December 2nd 2016.

Currently, Musa Aşoğlu who is being tried in Hamburg, is facing a threat of being extradited to USA. It hangs above him like a sword of Diogenis.

Let us back Musa Aşoğlu.

We can make protests in front of the German consular department in the countries we live in.

Likewise, we can organise a march, we can send protest faxes and mails to the German Ministries of Justice and Internal Affairs.

Of course, most importantly, let us not leave Musa Aşoğlu alone, let us write him a letter.

Maybe the letters will not pass into his hands immediately, because his letter are passing through Federal Prosecution’s audit before it is being sent to the prison administration.

However, let us write him by all means. Let us demonstrate our support.

Who is Ayten Öztürk?

Just like Musa Aşoğlu, Ayten Öztürk is a AIF veteran, a revolutionary that kept internationalism alive.

She spent a lot of work for many Symposiums, however she is the sole organiser of the one in Beirut.

In order to show her solidarity with the people of Syria, she performed as live shield.

On March 9th 2018, Ayten was arrested in Beirut (Lebanon) airport under suspicion of using false documents. She was kept prisoner for a week in a foreigner branch of the police and question. Here, her request to seek refuge in a third country was not accepted and instead, she “disappeared”. Since March 14th until August 28th there were no information about her whereabouts. People close to her, friends, lawyers and different organisation representatives were looking for her everywhere.

Lebanese government was asked: where is Ayten Öztürk? If she was sentenced: where, with what accusation, where she was taken and why no information is given to the lawyers? No answer.

If she was handed over to the Turkish government, on what ground and when? No reply.

Likewise nothing was being said in Turkey.

Later, on August 28th 2018, she was abandoned on a field in Ankara with her hands tied behind her back. Shortly afterwards, anti-terrorist units arrested and imprisoned her.

Ayten was tortured heavily for 6 months.

Ayten who is currently held prisoner in Sincan prison has 868 wounds on her body.

Let us demand reckoning for what was done to Ayten.

We can make protests in front of the Lebanon consular department in the countries we live in.

Likewise we can organise a march, we can send protest faxes and mails to the Lebanese Ministries of Justice and Internal Affairs.

Of course, most importantly, let us not leave Ayten alone, let us write her a letter.