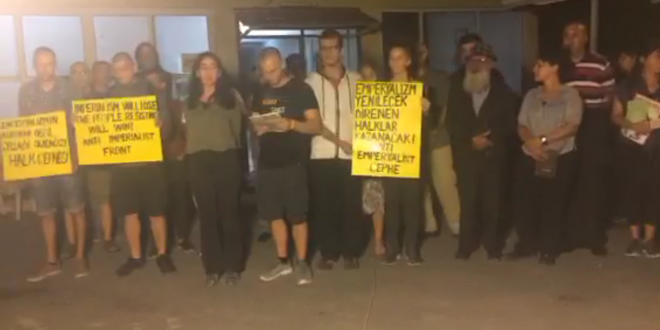 We are the Anti-Imperialist Front. We fight against the imperialism, fascism and the capitalism in our countries. We fight against the imperialist oppression in Italy, Bulgaria, Greece, Germany, Turkey, Syria, Ukraine. We solidarise with our comrades from the People’s Front who are under the attacks and oppression of the AKP’s fascism. We stand by their side and support them in this struggle. We know the difficult position of our comrades that were killed by the police bullets, of the thousands were imprisoned, of the hundreds were tortured. We are together with our comrades from People’s Front and Anti-Imperialist Front, such as Okan, Lerzan, Güneş, Aytaç, Betül, Naim, Ekrem Deniz… We are together with the Grup Yorum’s revolutionary musicians. The ones that are prisoners now…We’re together with the youth from Dev-Genç. We are together with the People’s Engineers and Architects. We are in solidarity with the people from Gazi, Okmeydanı, Çayan and other revolutionary neighbourhoods. We can never forget thousands of martyrs given for the sake of this, nor the achievements in the struggle for socialism. We know that in this type of period of the imperialist crisis, whatever AKP fascism does is directed to protect it’s own interests. That for this reason, as a leader of bourgeoisie Erdoğan as well is on the offensive to have a part in the Middle East, to be involved in the intervention in the Middle East and to occupy Syria. This state is an assassin state. The self-interest of the people and persons that live here is not to be found in any way. Because this situation is a situation that goes against the people that live in Turkey. It is because of this that the state attacks the people here very intensivly: from students to workers and revolutionaries. Fundamental fact of this government is that it is fascist, capitalist and imperialist, that’s what it exists for.The reality is the struggle that will be waged for the people’s hope, for the classless socialist society. Just as we waged the struggle against the imperialism in our countries, we’re together with the comrades that resist and wage struggle here. We are behind them. We know that this path is very long, and we learnt a lot on it. We are the ones who are right, we will win!