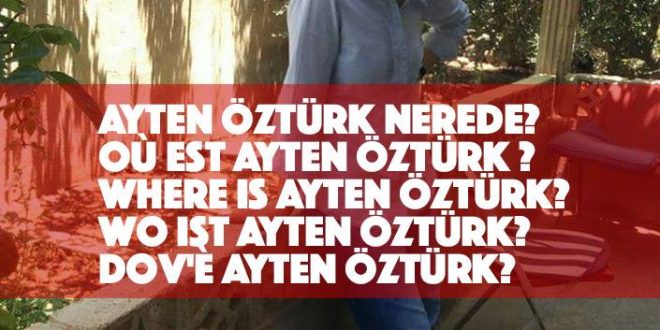 Ayten Öztürk disappeared on March 9, 2018. At the request of her friends, on August 6, 2018, Tayad’li Aileler (Tayad’s families) made a press statement in the garden of Küçükarmutlu Cemevi, house of worship of Alevi Küçükarmutlu.

Ayten Öztürk was last seen on March 9, 2018 in Beirut, Lebanon. Since then, no more news. According to a statement from the Syrian Popular Front, she was arrested for being taken into custody while leaving Beirut airport as she was going to take a flight to Athens. Since March 14, all research has been unsuccessful and no official information has been released.

Also according to the Syrian Popular Front, on May 5, the Lebanese people’s movement lawyer informed that Ayten Öztürk was delivered by the Lebanese government to the Turkish authorities, information not confirmed by the government of Ankara.

Sister of Hamide and Ahmed Öztürk, themselves victims of the fight against fascism in Turkey, Ayten also resisted the policy of the Turkish government and made several years of imprisonment for that.

But now the question is: where is Ayten Öztürk? Has she really been delivered to Turkey and then, since when? Is she in the hands of the MIT (Turkish secret services)? Or is she in a Lebanese prison?

Whether for Tayad’s families, the Syrian popular front, her friends, but also all people fighting for justice and against fascism in the world, these questions must receive answers. For this, it is possible to contact the Ministry of Foreign Affairs of Lebanon by mail, fax or telephone to: 00961-1333100.