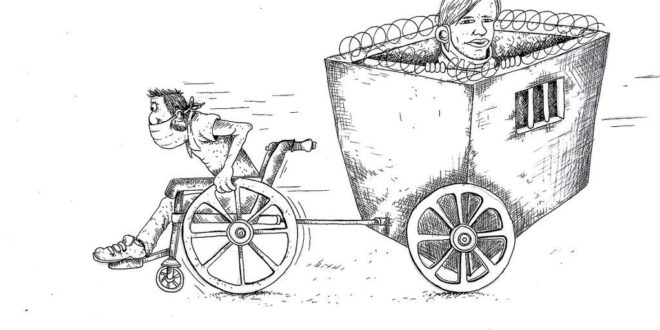 The Demands of Nuriye Gülmen and Semih Özakça Should Be Met!

We Got Semih, We’re Going To Get Nuriye Too!

Nuriye and Semhi have crushed the State of Emergency that was declared by the fascism of AKP with the excuse of the coup attempt of July 15, to suppress the people. Nuriye Gülmen and Semih Özakça were only 2 of the 150.000 public workers who were dismissed from their jobs by a governmental decree. But they have cornered fascism with their resistance and they are resisting today against fascism, on the front of the people, with their  hunger who’s nearing the 230th day and their bodies melting day by day.
Fascism of AKP has tried every possible way to stop the people’s support for Nuriye and Semih. They made brochures about them to prove their membership to a organisation, but it didn’t work. The hunger strike is a lie, they eat when they go home in the evening they said, but that also didn’t work. They imprisoned them, to isolate them from the people… didn’t work, they faced slogans of Nuriye and Semih everywhere. They changed the courthalls at the courts, tried to fool around but faced the participation and the resistance of the people at the court. The actions at Yüksel Street are continuing everyday. The only thing that seperates us from them are the walls. Today we have destroyed the walls between us and Semih with the trial at October 20. Now it’s Nuriye’s turn… We’re also going to get her from the hands of oppression.
In 1 month, close to 70 lawyers, People’s Front Members, revolutionary and democrat people have been because of the words of one slanderer. But the fascism’s power wasn’t enough. We are not 100 people, we are millions! Not only in Turkey, but everywhere in the world Nuriye and Semih became the hope of the peoples, gave them the power of resistance.
Let us enlarge this hope that is spread by the Anti-Imperialist Front. Wherever we go they say Nuriye and Semih, they are saying that ”they have risen up the whole world” with outrage is because of our persistent struggle. It’s because that we’re facing them at every trial as the AIF. Fascism has taken a step back with the release of Semih, we have achieved this with our consistent and persistant efforts. Now it is Nuriye’s turn, let’s also get her released and her demands met with the same persistence.
The imprisonment of lawyers, the People’s Front AIF members, dozens of People’s Front members and people relations is showing us how the fascism of AKP has been squeezed. Let’s squeeze fascism more and have the demands of Nuriye and Semih be met. Their lives and the light in their eyes are entrusted to us. Let us show the power of the people’s of the world, and turn their clueless rage into the acceptances of the demands. This power is in our hands… We are calling all our friend and comrades to do one action everyday… Without making a distinction between big and small, we call to resist by making a photograph, a video, an action or a song everyday. It is not the violence if the hits that make a hole in the stone, but the continuity! With this continuity and persistence we are going to achieve the acceptance if the demands together!
IMPERIALISM SHALL LOSE, THE RESISTING PEOPLES SHALL PREVAIL!
WE’RE GOING TO LET NURIYE AND SEMIH LIVE!
People’s Front International Relations Committee (Halk Cephesi Uluslararası İlişkiler Komitesi)
23.10.2017