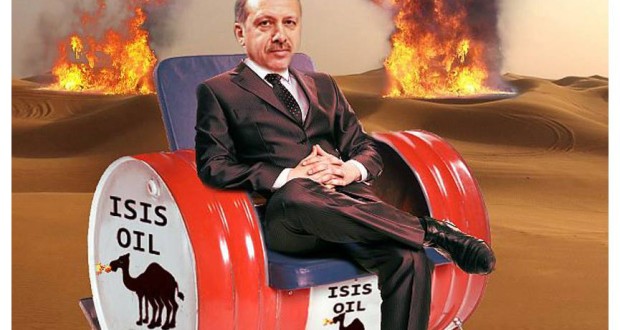 ‘President Erdogan and his family – is involved in this criminal business.’

Satellite images, video expose ISIS-Turkey oil routes. Russian military: ‘According to our data, the top political leadership of the country – President Erdogan and his family – is involved in this criminal business.’
FULL MoD BRIEFING: RT

The Putin don’t tell no lies! As expected, the Russian Defense Ministry has presented proof–satellite images and videos–that the Turkish regime’s leadership, including bandit Erdogan and his felonious family, are indeed deeply involved in ISIS’s criminal activities, from thieving billions of dollars in oil from Syria and Iraq to gun-running and providing the Takfiri terrorists with equipment and training. The Russian Defense Ministry today revealed that ISIS uses three different smuggling routes to transport oil and gas from Syrian-Iraqi territory it illegally occupies into Turkey on an industrial scale, thus daily profiting $3 million off this utterly criminal enterprise (which has now been reduced to $1.5 million thanks to Russia’s air strikes).
While it is true that we have been exposing this illicit industry for years now, Russia’s game-changing decision to present this evidence to the international media undoubtedly constitutes a proverbial bomb dropped right on the Neo-Ottomans’ heads. It’s all out in the open now. Erdogan and his AK Party cronies are simply not going to be able to just sweep their mafia-like operations back under the rug. The best part? This is but the tip of the iceberg as further incriminating details are expected in the days and weeks to come.
So… Was poking the Russia Bear worth it Erdogan? Where’s your resignation letter at?!