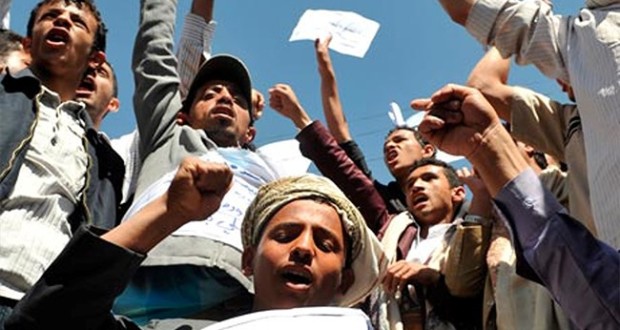 Yemenis have held a rally in the capital, Sana’a, to slam the ongoing Saudi military aggression against their impoverished country.
On Sunday, several hundred Yemenis, including rights activists and the representatives of non-governmental organizations, gathered in front of the United Nations (UN)’s office in Sana’a, urging the world body to take serious action to put an end to the Saudi aggression.
‘Genocidal war’
“We have congregated near the UN office to call for an end to genocidal war waged by Saudi Arabia…We want to say that the news about Saudi atrocities are either being blocked or fabricated by media in order to mislead the international community and silence the voice of truth,” said a protester.
Carrying banners and chanting anti-Saudi slogans, the demonstrators described Saudi atrocities in Yemen as far worse than the Israeli massacre of Palestinians.
“Saudi Arabia has killed Yemeni women and children and destroyed public and private properties and the country’s infrastructures. They systematically kill Yemenis in wedding ceremonies, at mosques and even at markets,” a protestor said.
“So this unprecedented genocide has not taken place anywhere else in the world even in Palestine. So, such a massacre and invasion should be stopped right away,” he added.
Yemen has been under Saudi military strikes on a daily basis since March 26, in a bid to undermine the Houthi Ansarullah movement and restore power to fugitive former Yemeni President Abd Rabbuh Mansour Hadi, an ally of Riyadh.
‘Damning evidence of war crimes’
Some 7,000 people have reportedly lost their lives in the Saudi raids, and at least 14,000 people have been injured.
Earlier this month, Amnesty International called on the international community to suspend the transfer of weapons and munitions to Saudi Arabia after the emergence of clear evidence that the kingdom is committing war crimes in Yemen.
The London-based rights group released a statement on October 7, saying that “damning” evidence of war crimes committed by Saudi Arabia, which is armed by such countries as the US, underlines the pressing need for an independent and effective investigation into the Arab kingdom’s human rights violations in the impoverished neighboring country; Press TV reported.
M/Fard
– See more at: http://en.alalam.ir/news/1750785#sthash.posc2HgV.dpuf