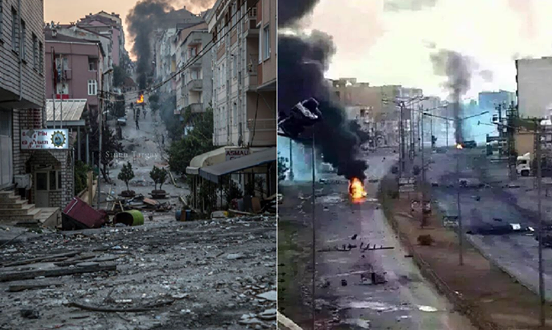 “Execution lists” of police against opposition forces in Turkey

About the seriousness of the recent attacks on revolutionary left and Kurdish national opposition in Turkey:

The lawyer’s collective stated, that the police had an “execution list” and that thez aimed to kill several opposition members.
In a statement HHB lawyers reminded to Günay Özarslan, who was killed by the police in Istanbul short time ago and claimed that there was established a so-called “Wanted terrorists” list, targeting civilians.

“The martial law and emergency rule, which were not given a name and have been practiced in the past days, show, that the open war politics against the people from the nineties, where the dual Ciller-Güres became symbols for mass arrests, torture and executions, will continue to be applied effectively again.
The words of Turkey’s president Erdogan “This is just a start, the first step, we’re going to apply any kind of measurement with determination” is a sign for this.

Our client Günay ÖZARSLAN was executed on 24th July in Istanbul-Bagcilar in a house she stayed. It was attempted to cover this open execution by lies as “there was a confrontation”, “She was searched as suicidal bomber’ etc..
But even the investigation files reflected that Günay was only killed because she’d said “I won’t surrender”. And today everyone knows that the murder of Günay ÖZARSLAN was an execution.

“The police published a list of Gazi residents”
(note: Gazi is a left neighborhood, known for its opposition to the state, especially for the uprising 1995, when the government tried to stoke a conflict among Alevites and Sunnites killing an old Alevite man in a café. Following army and police invaded the neighborhood and killed 17 people)

Now there was published an “execution list”, including the names and photographs of persons and clients of us, whom live in the neighborhood, continue their normal daily life, whom have to come regularly to the police station to give their signatures due to a decision for juridical control and even of a client who was arrested last week and released again.

This list is including number plates being titled with ‘number plates suspected of carrying bombs and arms’ as well as names of photographs of our clients titled with ‘Wanted terrorists’, is exhibited since one week in different places of Istanbul, in shopping centers, metro stations, metrobus and bus stations.
The publication of this list by the police throughout Istanbul in shopping centers, metro, metrobus and bus stations, means the preparation of a new execution of our clients. Our clients aren’t searched. This is a big lie. There is no search warrant against them. Our client Volkan PAMUK, who is a resident of Gazi and also listed among ‘wanted persons’, has to come regularly to the police station for juridical control to give a signature. Ilker ALTUNDAL was arrested on 15th July 2015 and released with a juridical control sanction. Neither there is any search or arrest warrant against our other clients, whose names and photographs were exhibited.
The police tells lies, it commits a crime, preparing an execution of our clients”.

The same massacres and executions you could already see in the Kurdish city Silopi, where at least 3 civilians were killed and hundreds injured by state forces.
There is a real war going on by the state of Turkey against the people.
Also the neighborhood Gazi was attacked after the execution of Günay Özarslan. the police tried to kidnap her funeral and soaked the whole neighborhood including the Cemevi with the funeral inside in gas bombs. This led to mass arrests due to resistance of the population.