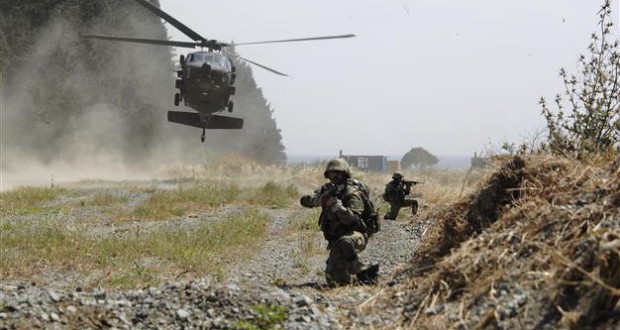 The Turkish Armed Forces (TSK) has recalled the commanders of troops deployed along part of its border with Syria to the capital Ankara, for a meeting during which they will discuss a possible military incursion into Syria.

Commanders of commando brigades in Bolu and Kayseri provinces will also attend this week’s meeting at the General Staff headquarters, where details of a possible incursion will be discussed personally by the commanders who would be responsible for such an operation.

Although Turkish Prime Minister Ahmet Davutoğlu said last week that there were “no immediate plans” for any incursion, the TSK has recently deployed additional troops and equipment along part of its border with Syria.

Ankara has floated the creation of a “safe zone” on Syrian territory due to concerns about Syrian Kurd advances and the presence of fighters of the Islamic State of Iraq and the Levant (ISIL), as well as the possibility of a fresh wave of refugees fleeing conflict, with fighting north of the city of Aleppo having recently intensified.

Currently, 54,000 soldiers – around 15 percent of the Land Forces’ total staff – are deployed near the border with Syria.

As part of the build-up, on July 5 a military convoy carrying cannons and missile batteries arrived in Kilis province near the border.

Meanwhile, military equipment sent from the TSK’s Artillery and Missile School in Polatlı, Ankara, is planned to be deployed near the town of Elbeyli in Kilis and at the Öncüpınar border crossing.
July/05/2015